Taylor Cordova, a server from Colorado posted an opinionated but widely shared view online to explain her point of view about labor in the US .
As the waitress was serving tables, she took a look at the bill after one of them.  After $187 worth of items, the tip line showed a big fat zero.  Cordova then got her phone out, took a pic of the receipt and put it on FB. The post included some emotional and clear remarks about being employed in the service industry waiting tables. 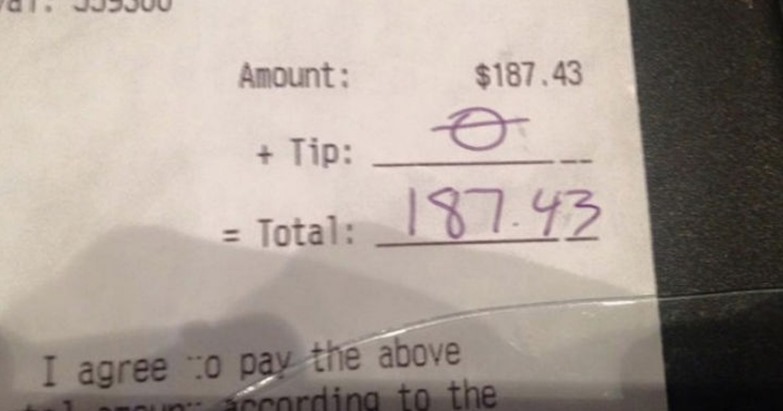 Communicating not only to the table who left the zero on the line for gratuity but to anybody who chooses not to leave a tip Cordove has one sentiment: “You are the lowest of the low.”  She went on with a justification of the outcomes of patrons eating out who don’t choose to tip:

Whenever you feel like it’s probably fine to not tip your server, that’s one more bill stacking up because they’re short on money. This is food for the week that our families will go without because you didn’t think it was necessary, even after asking for everything under the sun and receiving it free of charge, mind you. This is one less basic necessity my daughter needs because even TWO more dollars is too much for you. Every decision has a consequence. Servers are paid a base pay of $2-5/hr depending on the employer, so next time you don’t want to tip, regardless of the situation prior to receiving your bill, think about how much you would have to work that week off $2-5/hr to feed your family, not just you. Could you pay your bills based on that pay alone? Could you feed your family AND yourself? Because that’s what happens when you choose to not tip.

The U.S. Department of Labor corroborates some of her words stating that

“An employer of a tipped employee is only required to pay $2.13 per hour in direct wages if that amount combined with the tips received at least equals the federal minimum wage.”

The waitress’s thoughts arrive at some opinionated suggestions.:

“Don’t even bother walking into a restaurant if you can’t afford to tip…There’s a McDonald’s down the street if you’re that cheap.”

Cordova’s post has been shared more than 15k times and has gotten a lot of spirited debate, support, and interesting comments.