Rapper Bow Wow, whose legal name is Shad Moss, has learned a very important lesson – don’t ever mess with the first lady!

Seriously, the rapper could face charges for threatening and insulting the first lady, Melania Trump. He posted a tweet on March 15 and soon, it became very ‘popular’.

Only a few days later, he was advised to delete the tweet because the whole thing could lead to charges for felony threats, attorneys following the case have claimed.

In legal terms, this tweet could be argued to violate statutes within U.S.C. § 879: US Code Section 879: Threats against former Presidents and certain other persons.

The statute lays out that it is illegal to:

“Anyone that knowingly and willfully threatens to kill, kidnap, or inflict bodily harm upon:

(3) a major candidate for the office of President or Vice President.  Or a member of the immediate family of such candidate; or

Bow Wow’s tweet was in response to President Trump’s tweet earlier that same day where he was referring to a video in which Snoop Dogg was aiming at a clown president with a gun and pulled the trigger. 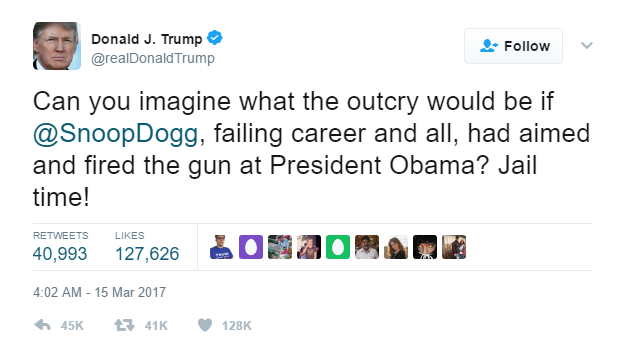 Snoop Dogg replied to Trump’s tweet, with a video.

“Now they wanna ask me questions and interview me,” Snoop said to his followers, “But guess what? I’ve got nothing to say, mate.”

Trump and the first lady didn’t answer it.

At this point, it’s unclear what actions, if any, are being taken against Bow Wow aka Shad Moss for his incendiary tweet.

Let other people see this story by hitting the SHARE button below!