You might want to check your bill carefully, especially if you’re splitting it. It can be difficult to know how much to tip your waiter or waitress but that pesky “suggested gratuity” that’s supposed to help could actually be tricking you.

The “suggested gratuity,” in theory, is supposed to be a useful guide in knowing how much tip you’re supposed to leave. This is great for people who are terrible at math or don’t want to use a calculator.

The problem is that if you’re using the numbers restaurants are providing, you could be paying more than you should be.

Take a closer look at the numbers, and you could find that restaurants – like The Cheesecake Factory – are using some odd math to get them.

Their practice has led to a lawsuit, and it’s over the apparent lack of change when the bill is split.

For example, if a $100 bill is split into two $50 bills, the tip is shown for the original amount, not for the amount split. The majority of folks have seen this and can work out the confusion for themselves. However, some folks have just now realized and noted they’ve been paying more than they needed to for the service.

This is the lawsuit The Cheesecake Factory is dealing with. 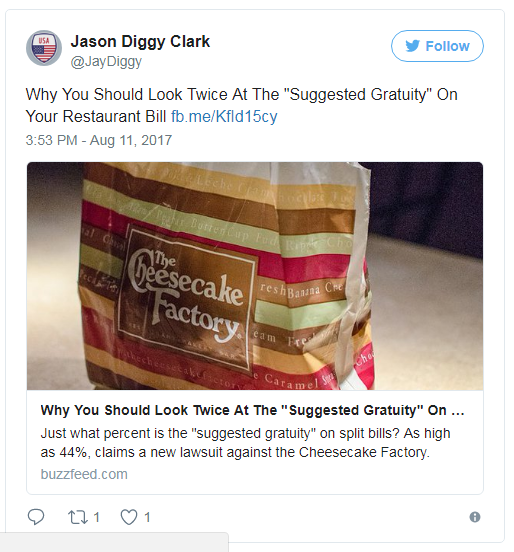 A complaint on the practice is that the restaurant is suggesting the tip on the initial whole check including the tax.

Most establishments calculate the gratuity amount using the total before the tax.