On March 3rd, a female daycare employee from Clifton Heights, PA was arrested for apparently shoving a young child who then tumbled down the stairs at her work facility.

The supervisor at the childcare center named Shawayne Tavares had been monitoring the security footage as she observed Sarah Gable, the daycare worker, forcibly handle the 4-year-old girl who was practically launched into the air down the stairs.

The manager had informed the local news station KYW-TV, “I went and confronted her at the bottom of the stairs, you can see me on cameras…I said ‘What are you doing?'”

The recorded video exhibits a middle-aged female shoving the child at the top of first stairwell turn, who then falls down a few stairs down to next landing. The guilty woman then raised the child up and stared into the CCTV camera for a moment as to have noticed she had been recorded. 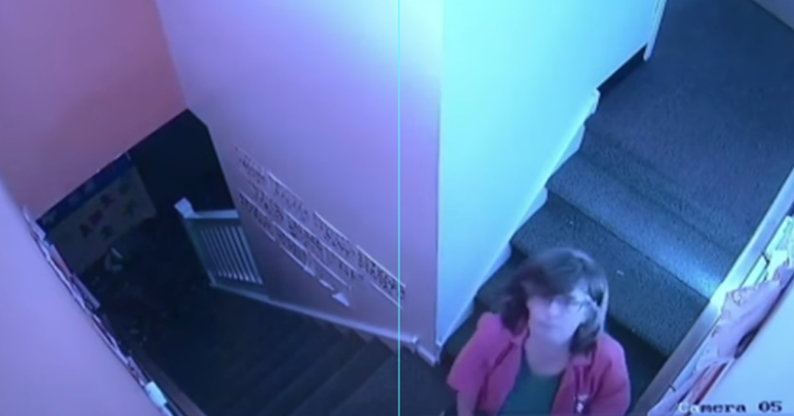 A bad memory was left in Tavares’ mind as she recounted, “It still hurts me, just seeing the video…The little girl was just really shaken up. Her eyes were literally like ‘help me.'”

The Philly Voice reported that security cam footage caused the daycare worker to be immediately terminated and is now facing child endangerment and assault charges.

The superintendent of the Police department in the Pennsylvania district, Michael Chitwood, revealed the video to reporters and journalists through a press briefing. Chitwood lamented, “it’s every parent’s nightmare that sends their kid to daycare.”

“You don’t throw a child down a flight of steps…That’s common sense,” Chitwood stated.

The superintendent thanked the daycare facility for providing the footage to law enforcement.

The daycare supervisor told WCAU more about the episode in which Tavares stated, “She picked up the shoe and tried to come to the end of the stairs like, “Oh, it was her shoe” that caused her to fall. I’m like, “It’s not her shoe. I just watched you on camera do it. She needs to go to jail for that.”

Thankfully, the child just suffered some slight knee pain and came back to the child care location a day later.

The daycare employee was booked but posted a twenty-five thousand dollar bail and is now out of jail.

According to the Philly Voice, the Upper Darby Police superintendant believed the bond was not harsh enough due to these particular criminal offenses against a child.