A daycare center where children could stay overnight as their parents worked was ravaged Sunday by a fire that killed five children, and a grieving mother said four of the victims are her children. Shevona Overton told CBS affiliate WSEE-TV their names are La’Myhia Jones, 8; Luther Jones Jr., 6; Ava Jones, 4; and Jaydan Augustyniak, 9 months.

“I’m just so hurt my babies are gone,” Overton told Erie News Now Lisa Adams. “I love them dearly. I just hurt inside knowing that my kids were fighting and hurting in that fire. Every minute, I feel the same pain.”

At least four of the victims were staying overnight at the residential house that had been turned into a daycare center, Erie Chief Fire Inspector John Widomski told the Erie Times-News. 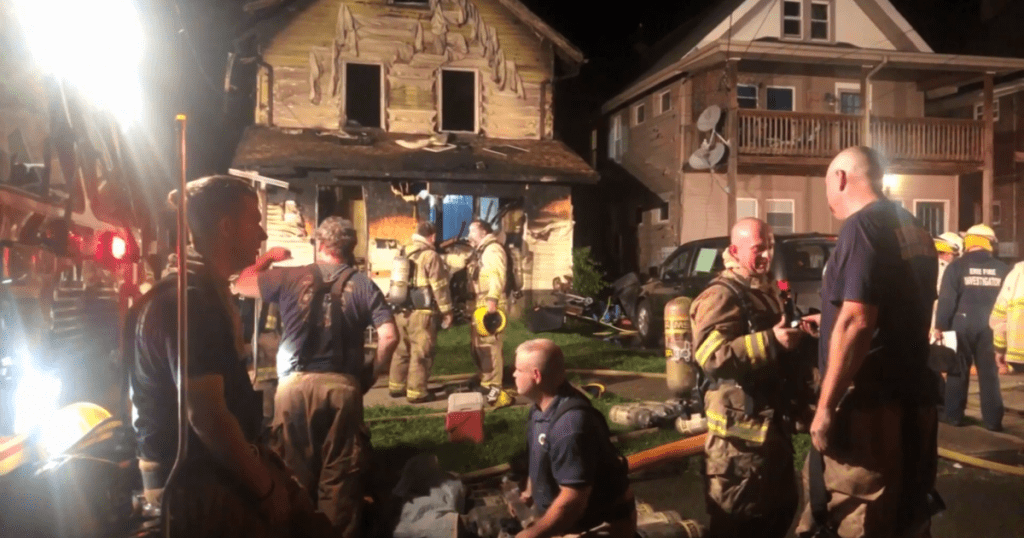 The fire reported at about 1:15 a.m. Sunday was funneling out of every first-floor window when firefighters arrived, Widomski said.

Valerie Lockett-Slupski, standing across the street from the fire-damaged house, told the newspaper she was the grandmother of four of the children, and that they were staying at the daycare center because their parents were working overnight. She said the family had two boys and two girls and had used the center for almost a year.

“So we are all at a loss, trying to figure out how this happened,” Lockett-Slupski said.

The cause of the fire remained under investigation Sunday afternoon, Widomski told the newspaper.

The Erie Regional Chamber and Growth Partnership list the Harris Family Daycare as “a 24 hour, 7 days a week childcare service including holidays.”

The state Department of Human Services Office of Child Development and Early Learning listed the daycare as in compliance with requirements following a Dec. 28, 2018, inspection. But a Jan. 3, 2019, inspection note on that listing highlighted “ashes and cigarette or cigar butts” in “a childcare space, play space or food preparation area.”

The daycare center’s response to the note reads, “I will make sure it will be cleaned up and remain that way,” and the department listed the issue as corrected.

Another department note from the same date reads “protective receptacle covers shall be placed in electrical outlets accessible to children 5 years of age or younger,” to which the day care’s response was, “I turned the outlets so they were closed. I will make sure that they are turned closed when not in use.”

That issue was also listed as being correct.

Widomski told the newspaper that the fire appeared to have started in the living room area on the first floor. The department’s two fire inspectors and three Erie police detectives trained in fire investigations are working to determine the cause of the blaze.

The owner of the center was flown to UPMC Mercy for treatment, Santone said.

Erie police detectives said the owner was in stable condition, the newspaper reported.