This is the painful moment a cheeky giraffe reached inside a vehicle for food before the car’s window shattered into pieces over its head.

The curious animal had put his head into the car of a couple at West Midlands Safari Park in Worcestershire yesterday.

The couple, laughing at the surprise interaction, started to wind up the window which then shattered into shards over the giraffe’s head.

Safari park staff have launched an investigation into the incident, though they confirmed that the giraffe was uninjured.

The couple seemed delighted with the giraffe’s attention at first, laughing and talking excitedly to each other.

Some parts of the drive-through safari at the park allow windows to be kept half open so that visitors can feed the animals. 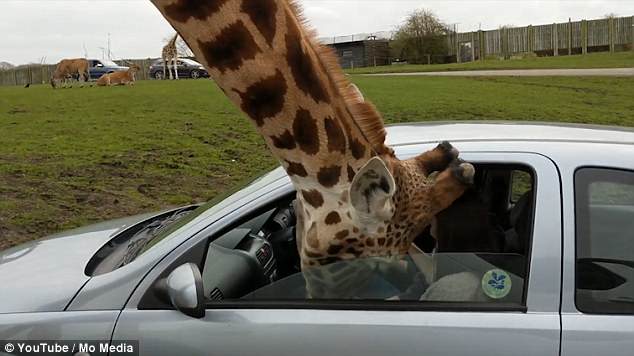 The rules state that feeding is allowed as long as the hand giving the food is kept outside of the car.

Unsurprisingly, the giraffe isn’t aware of the rules ducks its head into the car, seemingly to try and grab some food in a container.

The situation quickly takes a turn as the glass shatters over the animal’s head, which is trapped between the roof of the car and the window.

Some onlookers, who are filming the giraffe from another car, are stunned into silence.

They ask: ‘Oh God, are you alright? Do you want me to try and call someone?’

The person with the camera says that the giraffe might be injured and says he is going to call for help as the clip ends.

They told Mail Online: ‘I recorded this, I can assure you the giraffe was perfectly fine. I honked the horn for the keepers to come over. I pointed out the giraffe and they used food as bait to get a closer look. They were happy that it wasn’t hurt and let it be.

‘The passenger did have some cuts. In fact, we had lots of glass in our car, on my lap and on the dash.

‘No idea why the window was raised.’ 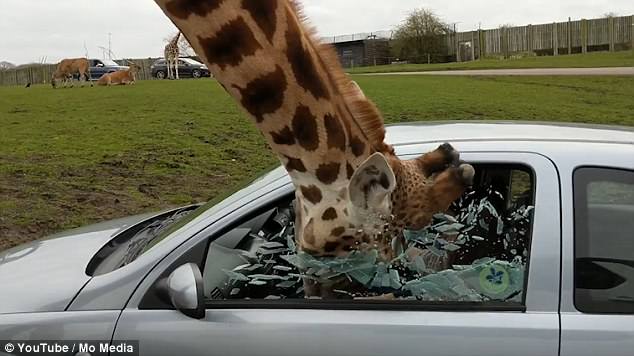 However, the animal became trapped between the roof and window and shattered the glass into shards