Expect to be encouraged, or maybe you’ll groan… We’ll see in a second.

A restaurant in Missouri had a customer who left an interesting tip that made an impact a few weeks ago.

As it happens if you put a few greenbacks on the table for the wait staff you can also put truth to power with an interesting note that goes along with it. 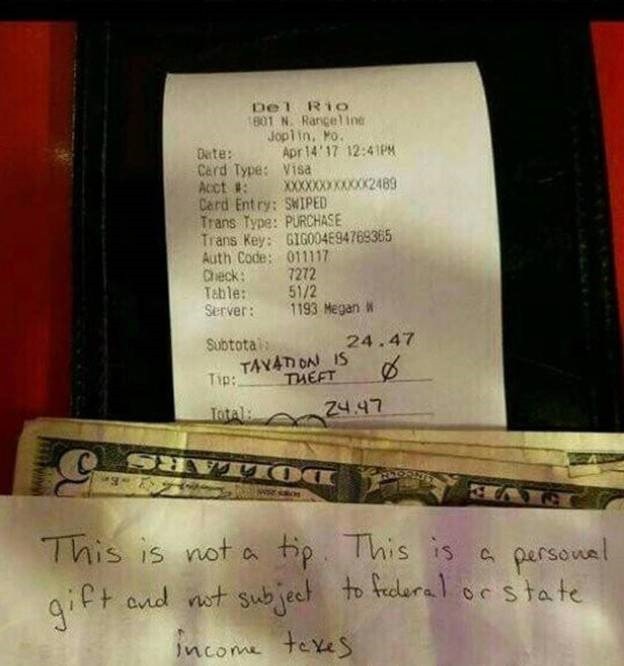 The photo initially showed up on the popular site Reddit and demonstrates the patron put down “$0” as the gratuity on the bill, however still left the employee waiting the table with a tip in cash along with a note. The note stated:

“This is not a tip. This is a personal gift and not subject to federal or state income taxes.”

We have seen lots of reports concerning customers leaving behind huge amounts on the tip line, in addition to restaurant-goers not tipping or putting their own figurative two cents as rather than actual cents and dollars, so this appears to be a new kind of tipping story that includes both.

Based on the Libertarian’s homepage the political party declares that:

“all political parties other than our own grant government the right to regulate the lives of individuals and seize the fruits of their labor without their consent.”

Yet despite the fact that they are publicly in opposition to taxes, Libertarians do feel that individuals should have the ability to offer money to anyone and for whatever reason the person decides on.

A user from Twitter gave their viewpoint on the matter. 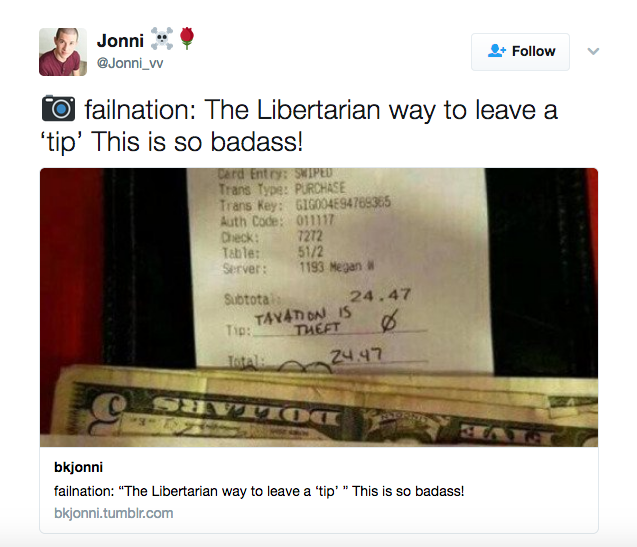 While it’s uncertain how things such as roads, school, and other things funded by taxes would be paid for, the tip in this form was likely valued by the host, considering that servers favor paper cash for tax declaration reasons.

Perhaps we all have a bit of libertarian in us. Or maybe not…