As a great number of laborers across the country proceed in battling to get a minimum wage of 15 dollars per hour, the fast food giant Wendy’s started putting in digital stations that allow customers to order directly, with a goal to put these units in many additional Wendy’s restaurants in the upcoming years.

The chain began their blueprint of installing these direct ordering kiosk stations last year due to “growing labor costs associated…[and] rising minimum wages.” Wendy’s is in progress of placing these new ordering stations throughout several of their Ohio establishments. The goal for 2017 is to have as many as one thousand of their restaurants integrated with these self-service kiosks. 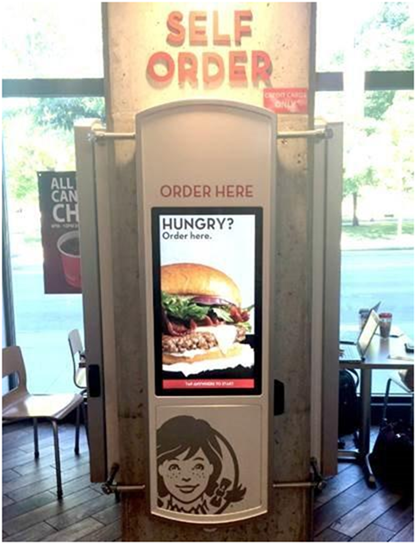 David Trimm, a higher-up at Wendy’s states, “There is a huge amount of pull from franchises… we can absolutely see our way to having 1,000 or more restaurants live with kiosks by the end of the year.”

Each Wendy’s location will normally get around 3 self-service stations for approximately $15,000, reports the Columbus Dispatch. The stations will cover their cost in 24 months from the locations lowering overhead costs and existing labor, claims Trimm, who is Wendy’s Chief Information officer.

Wendy’s locations aren’t going to be forced to deploy these self-service units inside their restaurants, though the choice will be offered very soon.

The human-free ordering stations aren’t supposed to completely exchange human based work, but instead, transfer jobs and human-based services into different aspects of the business. Wendy’s wants the self-service stations to assist in controlling the growing pay and $15-an-hour demand that many laborers continue to strive for.

Wendy’s COO, Bob Wright, lamented to a crowd of Wendy’s investors, “Last year was tough…5 percent wage inflation…what are we doing about it?” The chief operating officer projects that in 2017, Wendy’s anticipates regular wages to climb an additional few percent.

Wendy’s aims to establish their chain as a technological frontrunner in the fast food industry with the inclusion of these self-service machines.

The restaurant chain also claims that another good thing concerning the kiosks is the impeccable reliability of the orders.

Bob Welcher, the President of a consulting company named Restuarant Consultants Inc., joked about the new units, “They are always courteous…They always show up for work on time.”

Does this seem right to you?  Share below and let people know!