Daveanah Cowie, 21, said her seven-week-old son could have died if she had listened to the hospital receptionist’s ‘ridiculous’ response. Instead, she ran with him cradled in her arms to find a doctor.

The young mother had told of her ‘total disbelief’ when she dashed into A& E (an emergency department) with her lifeless baby pleading ‘Help, he is stopped breathing,’ when she was told to sit down and wait her turn.

She said: ‘If I had heeded her advice my baby could have died. He was really pale and had stopped breathing for two or three minutes. Every second was crucial. There was no way I was going to sit and wait my turn. It was an emergency!’ 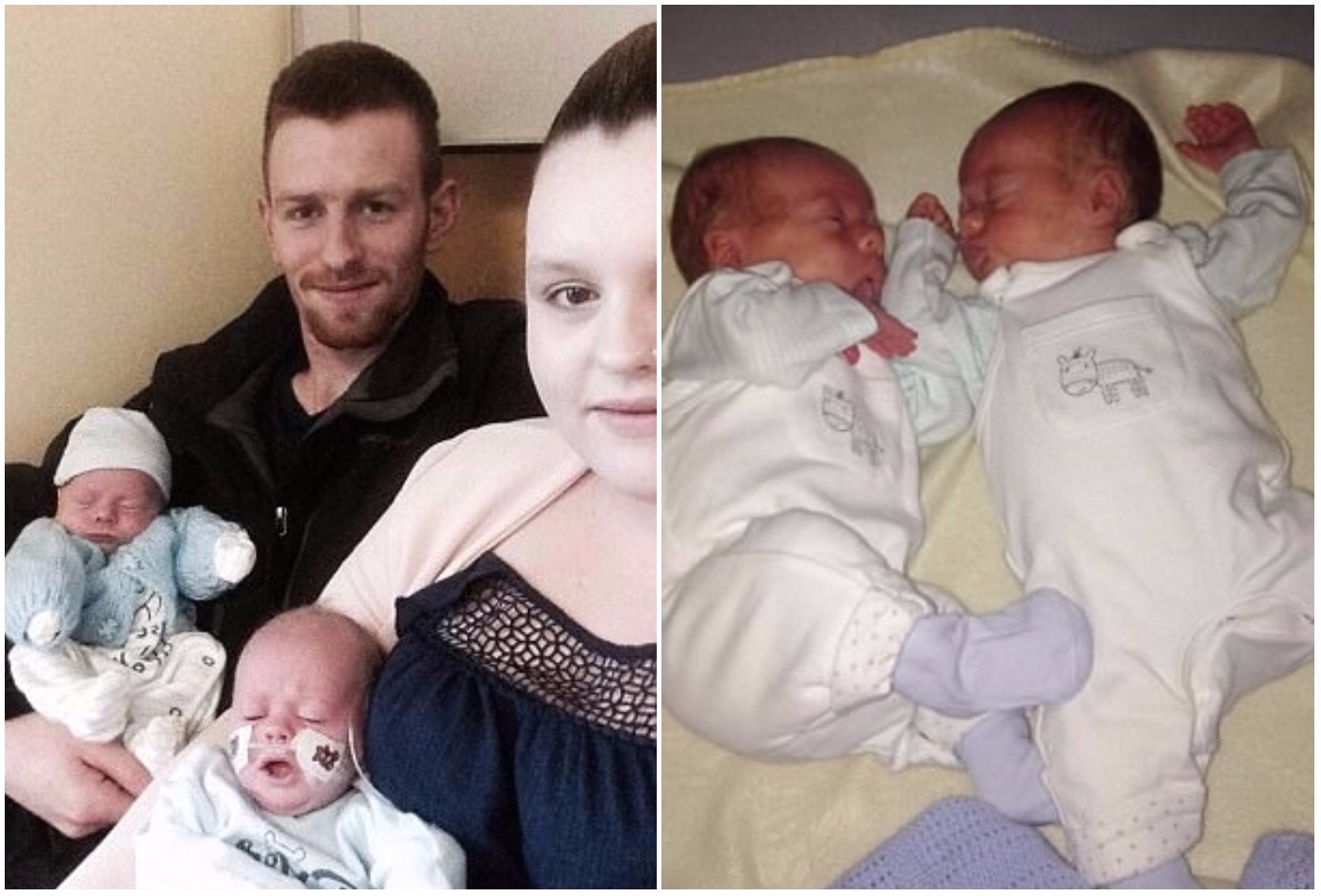 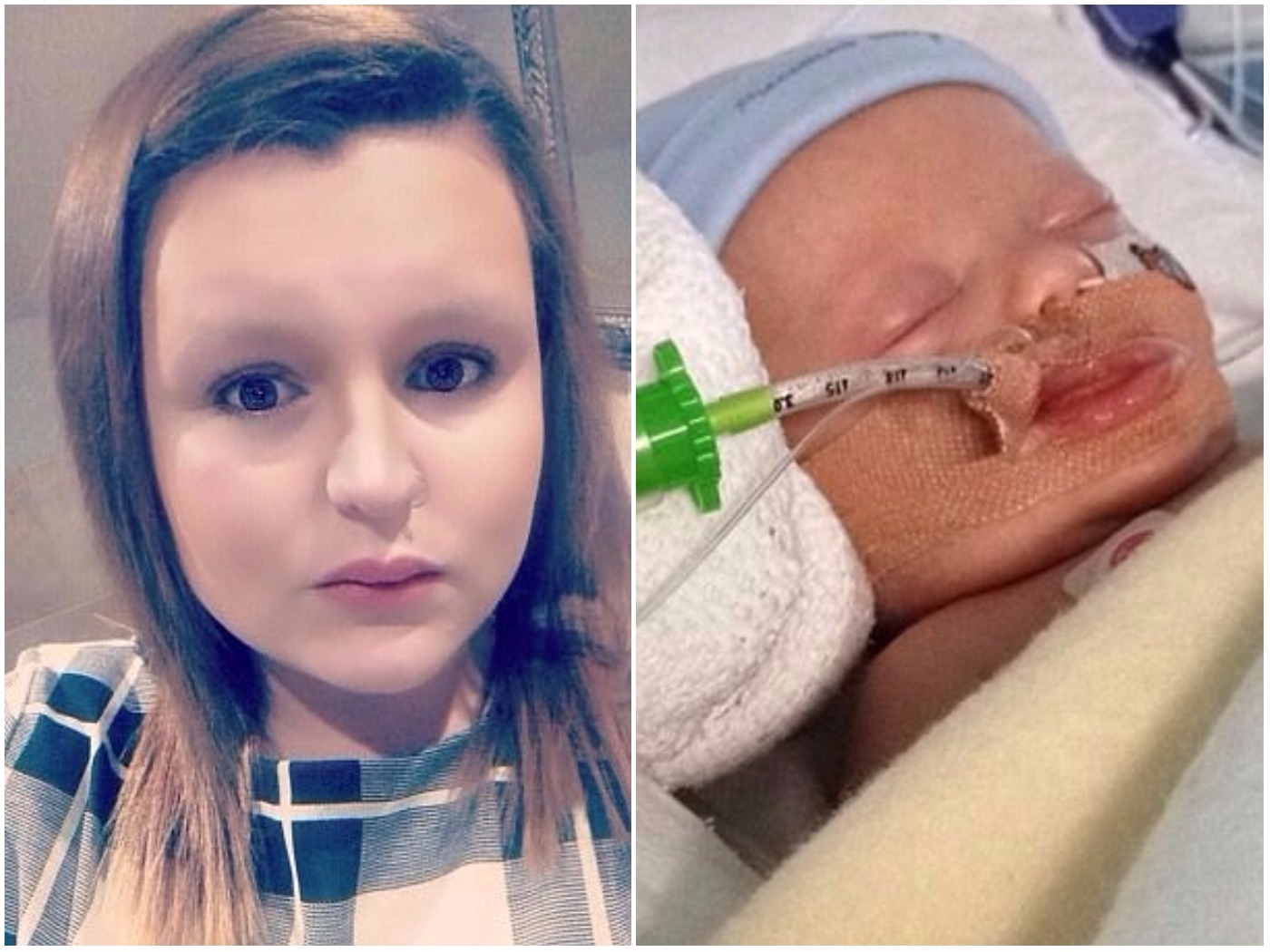 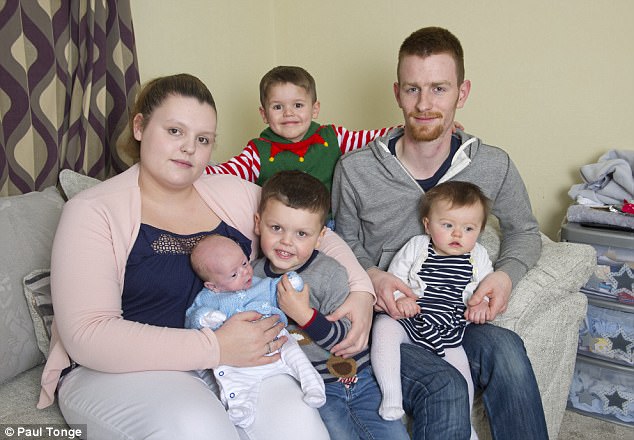 The tiny baby, Tommy-Lee, suffers from bronchiolitis, an acute viral disease common in infants. He was immediately resuscitated by doctors at Derby Royal Hospital and put on a life support machine.

He was then transferred to a special care unit at Nottingham’s Queen’s Medical Centre.

The mother-of-five relived her ordeal: ‘My emotions were jumping all over the place but I managed to keep calm for my baby’s sake.

‘When the woman at the reception desk started asking for his name, date of birth and personal details I was in total disbelief. I kept telling her he wasn’t breathing and needed urgent help but she simply said: “Please sit down and wait your turn.”

‘She was in her 40’s and you’d have thought she’d have known better. It was appalling the way I was treated. She could see I was already distressed.’

Ms. Cowie said she has now lodged a formal complaint against the hospital’s unnamed member of staff.

She said: ‘Blunders like this mustn’t be allowed to happen again. Surely a patient with a potentially dying baby is allowed to jump the queue and be given priority treatment.

‘Luckily I didn’t listen to her and just ignored her and went straight through to the nurses and doctors desk where I got help for Tommy-Lee.’

Tommy-Lee has a twin brother Arlow-Jack, who suffers from the same breathing condition. The twins were born at 30 weeks on October 11 – 10 weeks prematurely, weighing 3lb 10 oz and 3lb 14 oz. Both are now a healthy 5lbs. 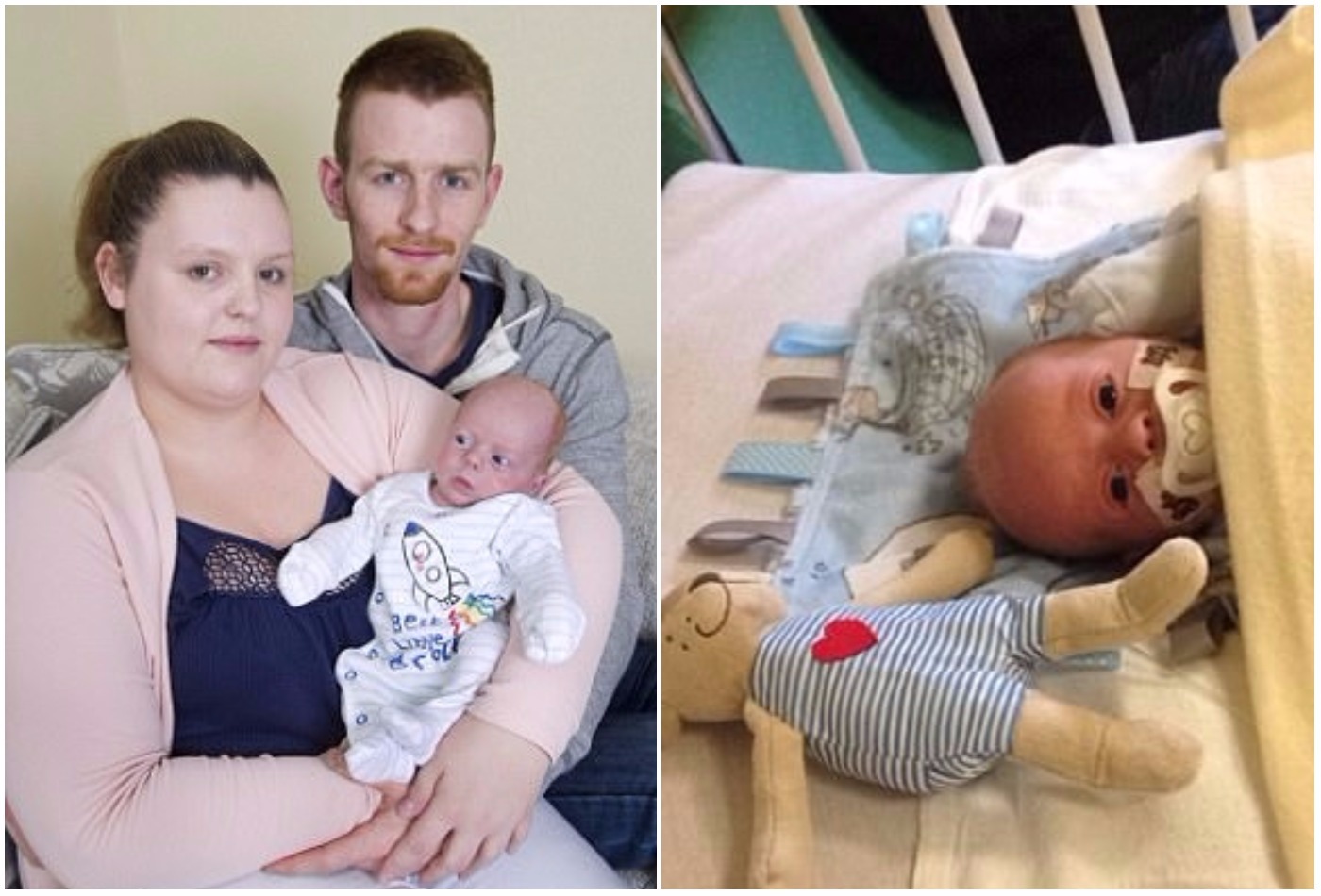 Tommy-Lee was found to have bronchitis and has been in hospital for more than a week along with his twin brother Arlow-Jack, who has the same condition 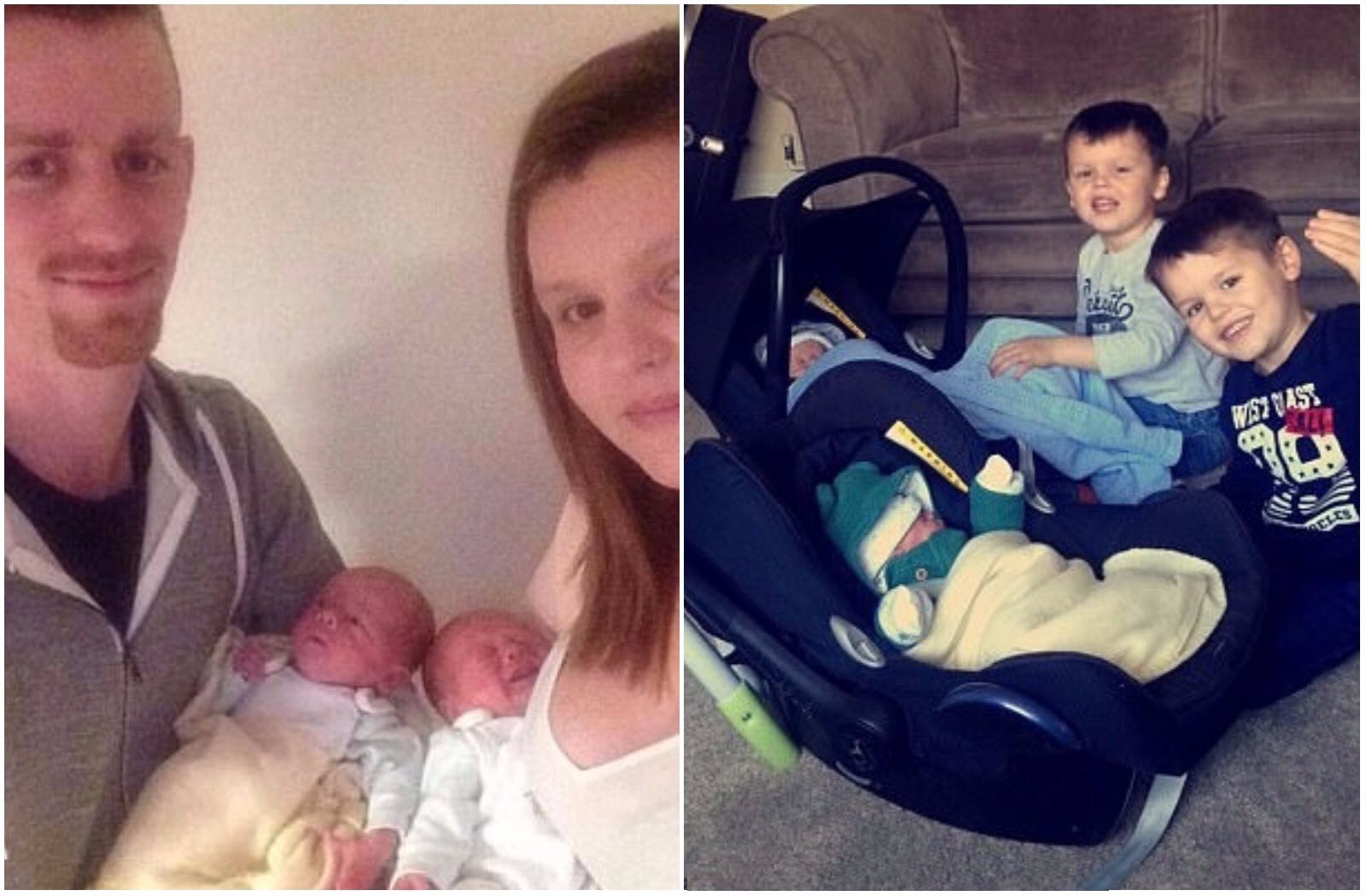 Ms. Cowie said she is ‘outraged’ by the ‘lack of knowledge’ and is calling for staff to be given more training. The twins are pictured at home (right) with Layton-McKenzie and Dexter-James

Unfortunately, both babies have spent time in the hospital being monitored and treated. The day of her ‘nightmare’ Tommy-Lee, had only been home for a week and was not bottle feeding, when a frantic Ms. Cowie and partner Jamie Brewin, 23, a self-employed builder from Derby, took him to their local hospital.

The mother explained: ‘When we got him out of the car seat at the A& E entrance he wasn’t breathing and looked really pale. I ran with him in my arms to the reception.

‘The way we were treated was outrageous and irresponsible. I couldn’t believe it. My baby was not breathing, and I was told to wait. I haven’t even received an apology. My baby’s life was at risk.’

Tommy-Lee has been transferred from the QMC to the Derby Royal, where his relieved parents visit him daily. The baby is due to come  home soon to join his twin brother.

Ms. Cowie smiled and said: ‘The twins are both doing OK. They’re so tiny but absolutely beautiful. We can’t wait to have the whole family together for Christmas. Next week will be the second time all seven have been at home together. It’ll be amazing and we can’t wait but we’ll have our hands full!’ 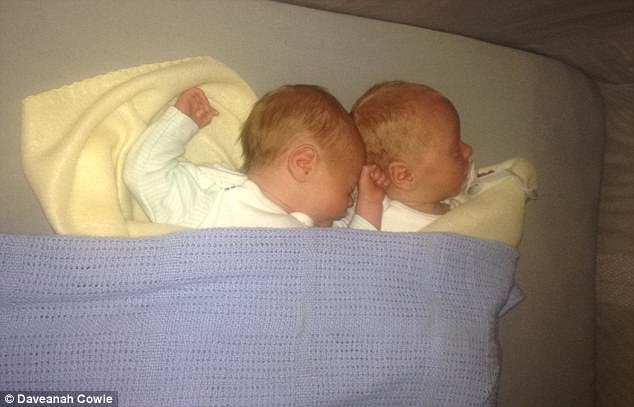 Tommy-Lee is still on a ventilator battling his bronchitis but is ‘doing well’ and due home on Monday. Both he and his brother Arlow-Jack are slowly making a full recovery 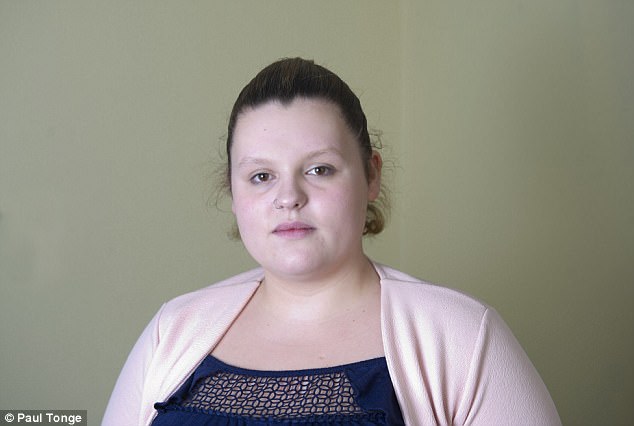 His mother added: ‘I just can’t believe how anybody could be that irresponsible. If I had waited my baby could’ve died’

She added: ‘We love parenting and we cope well and work as a team. My mum helps so does Jamie’s mum and sister.’

Mr. Brewin is now a full-time father, said: ‘We’re pleased our hospital ordeal is over. We were distraught at the time. Now we’re just focusing on the twins and it will be great to have them both back home. We’re very proud of our family. It’s one big happy one.’

Ms. Cowie, who had her first baby at 17, added: ‘We’re quite young to have five kids but wouldn’t change it for the world.’

‘I told the doctor what had happened and she said: ‘She probably just needs more training.’

Derby Teaching Hospitals spokeswoman said: ‘Our first priority is always the safe care of the babies and children brought to our children’s emergency department, and thanks to the expertise of our highly skilled emergency team, the baby, in this case, received appropriate care.

‘We were concerned to find that a receptionist failed to immediately recognize the serious nature of this situation, as this is highly unusual for our dedicated team of reception staff.

‘We immediately started an investigation, and we are now reviewing the training we give to reception staff in the children’s emergency department. We are also happy to meet Ms. Cowie to explain the steps we have taken.’