A Georgia man says he was ordered to cut his own dog’s head off after police shot it dead.

Joe Nathan Goodwin was at work on Friday when he received a call from his distraught girlfriend Natasha Dakon telling him the police had turned up at their home and shot their dog after receiving reports it had bitten a neighbor.

He rushed home to find the family’s beloved dog, which appears to be a Pit Bull cross, dead and the police on his front lawn. Little did he know, the worst was yet to come.

The cops, who claimed they’d shot the animal when it lunged at a deputy, then ordered the grieving pet owner to decapitate his two-year-old dog, Big Boy.

They claimed that his head had to be removed to be sent for rabies testing – despite the fact Big Boy was fully vaccinated against the deadly disease.

The stunned Goodwin, who began recording the confrontation with the officers on his cellphone, says that when he refused to cut off his dog’s head, Crawford County Sheriff’s Office investigator James Hollis threatened to throw him in jail. 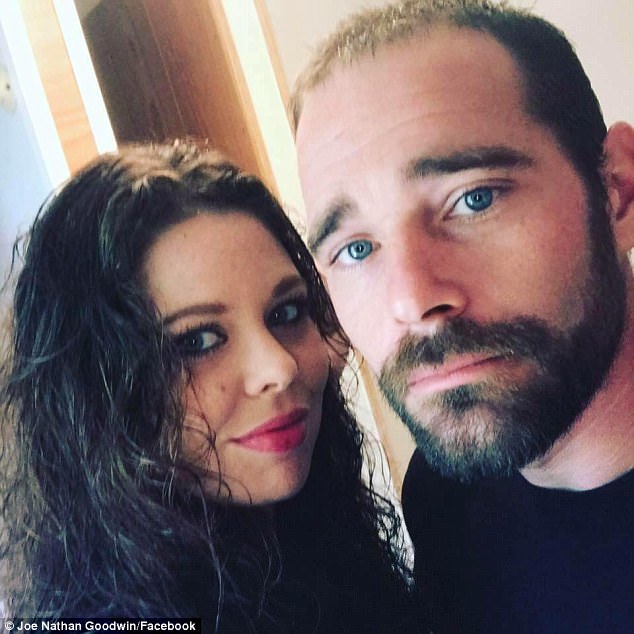 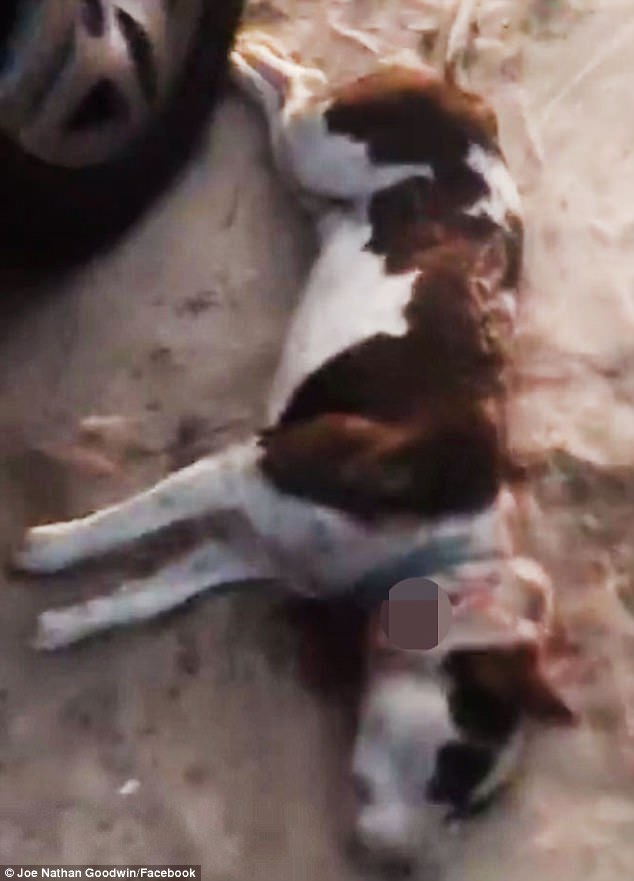 ‘I will take you to jail and charge you,’ he warned Goodwin when he protested.

Goodwin demanded to know what Hollis planned to charge him with, the officer initially replied that he’d tell him when they got to the police station. Another officer told him, ‘you can be charged with disorderly conduct.’

Hollis appeared to be getting increasingly agitated by Goodwin filming him, said: ‘We asked you to remove the dog’s head. And you’re refusing, right?’

Goodwin, who still appeared to be in shock over the bizarre request, replied: ‘I ain’t got a … knife to cut’ the head off.’ 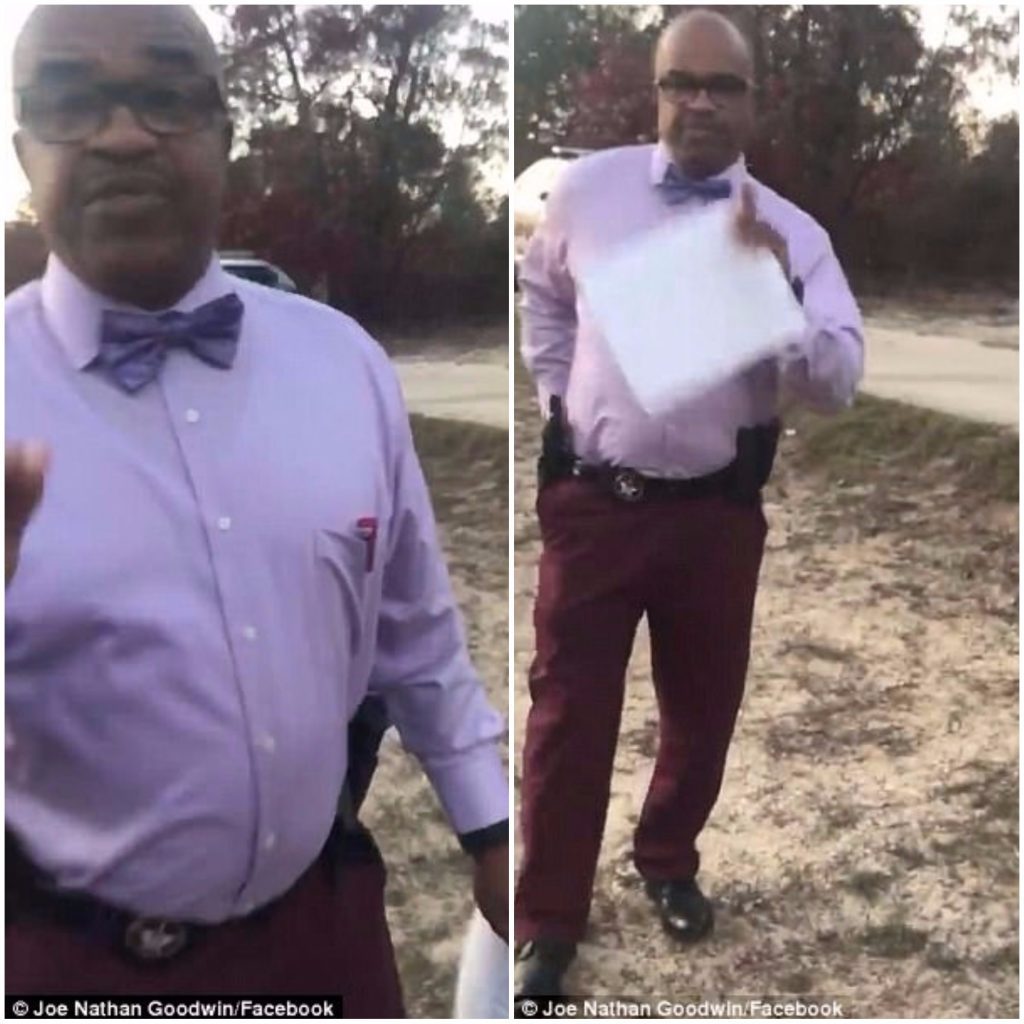 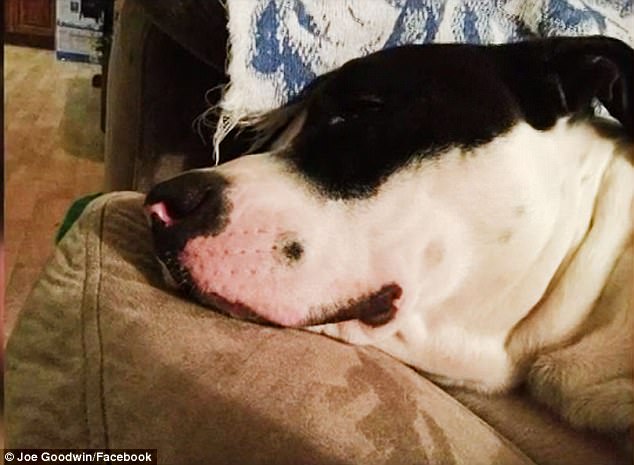 That is when the other officer jumped in, adding: ‘If you would just listen, we don’t know this process either.’ Another video clip showed Goodwin being slammed onto the hood of the car when he refused. Goodwin said later that he told officers that his dog had been vaccinated against rabies but the cops wouldn’t let him leave the scene to get the paperwork.

Goodwin eventually agreed and his girlfriend grabbed him a kitchen knife from the house. He was then forced, as the cops watched on, to saw and hack away at his pet’s neck with the small knife until he could remove his head.

‘This was very traumatic for the kids and I,’ Goodwin wrote on Facebook after posting the harrowing video clip of the decapitation.

‘I don’t think anyone should be forced to do what I had to do to their own animal,’ he later said, breaking down in tears, ‘I am sick to my stomach.

‘I can’t get that scene out of my head.’

He added he wanted his story shared because ‘I just don’t want this to happen again to any other person.’

Following the beheading, another video clip shows the officer telling Dakon put the head into a plastic bag. 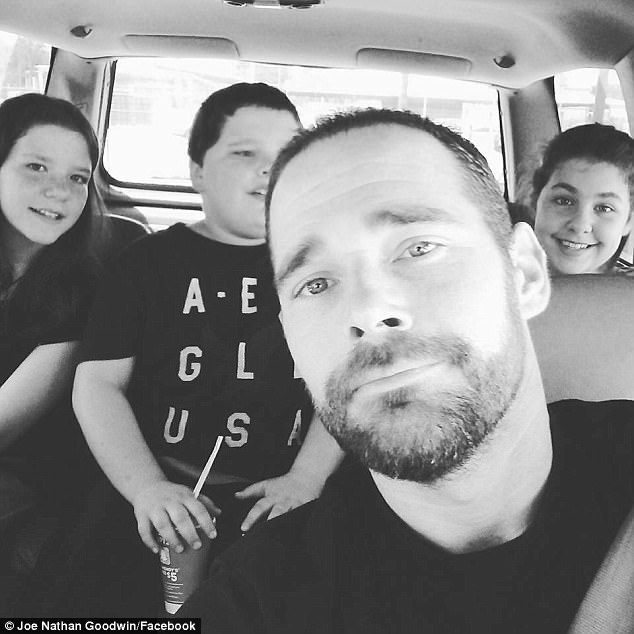 ‘You gotta freeze it,’ Hollis added. ‘That can be tested for rabies, OK?’

The couple was then ordered to ‘meet them at the health department in Roberta with the head’.

Dakon said she cried all the way to the health department with her dead dog’s head in her car, before dropping it off at 7 pm on Friday.

Typically, animals suspected of being infected with rabies will be quarantined and closely monitored for ten days. If it shows signs of the disease, anyone who has been bitten will receive treatment. If the animal has been killed, it’s brain will be sent for screening for rabies.

It is unheard of for a mourning pet owner to be asked to remove their own dog’s head for the procedure. If the animal was infected, removing the head without proper training or equipment would also put the owner at risk.

However, in this case, it does not appear that Big Boy was infected as his owner says he had been vaccinated against the viral disease.

Crawford County Sheriff’s Office told DailyMail.com an investigation has been launched over Hollis’ actions but would not comment further.

Goodwin has since revealed he plans to take legal action against the police.

He said that he had been given the option to call a vet and pay to have the head removed but, with three children and Christmas approaching, he simply could not afford the procedure.

Goodwin added that he was not allowed to leave the scene, and was threatened with arrest if he did.