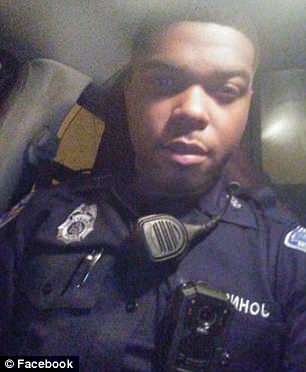 Arkansas officer Oliver Johnson Jr, 25, was fatally shot when a violent shooting unfolded outside his home on Saturday

An off-duty Arkansas cop was fatally shot in his own home when 40 gunshots were fired towards his apartment.

The father-of-two was inside the West Memphis apartment playing video games with one his daughters when the shooting took place on Saturday around 3.30pm, police say.

Rounds of bullets hit the facade of his apartment and one hit Johnson in his upper torso, according to the Northwest Arkansas Democrat-Gazette.

Johnson was home with several children including his daughter when the shooting took place.

A family member performed CPR on the officer after he was hit.

He was taken to Regional Medical Center in Memphis, where he was pronounced dead. 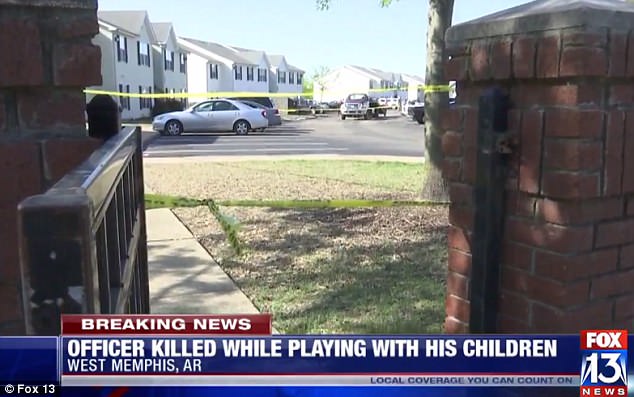 Bullets hailed his apartment, police tape marking off the property is pictured, around 3:30 pm on Saturday and a stray bullet hit him in the upper torso 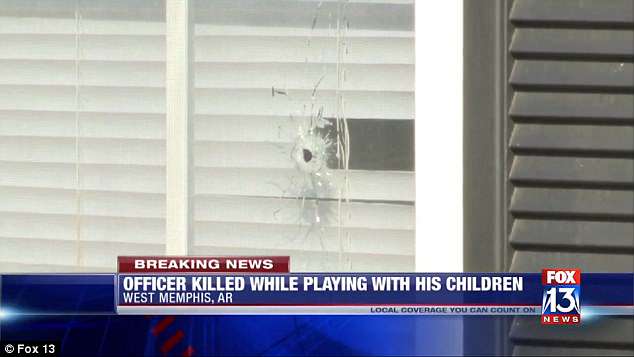 Bullet holes can be seen in the window and facade of the apartment. Police say the shooting was between two groups of people unrelated to Johnson 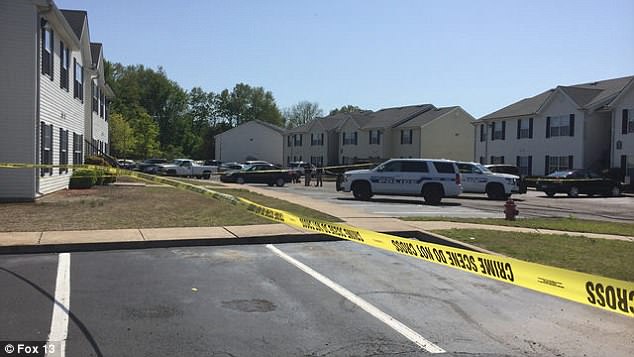 Johnson was playing video games inside his home when the shooting took place. Neighbors say children were inside the home with him, one of them was his young daughter

Johnson’s relative Portia Weatherspoon says she saw someone in a vehicle drive by and open fire.

Police do not believe that Johnson was the intended target in the shooting.

‘It was an encounter between the suspects and another group outside of the apartment,’ West Memphis Police Captain Joe Baker said to WREG.

‘This hits everyone a little close to home in law enforcement. He was a police officer, some of my officers did, in fact, know him,’ he added.

Police are looking for the suspects. 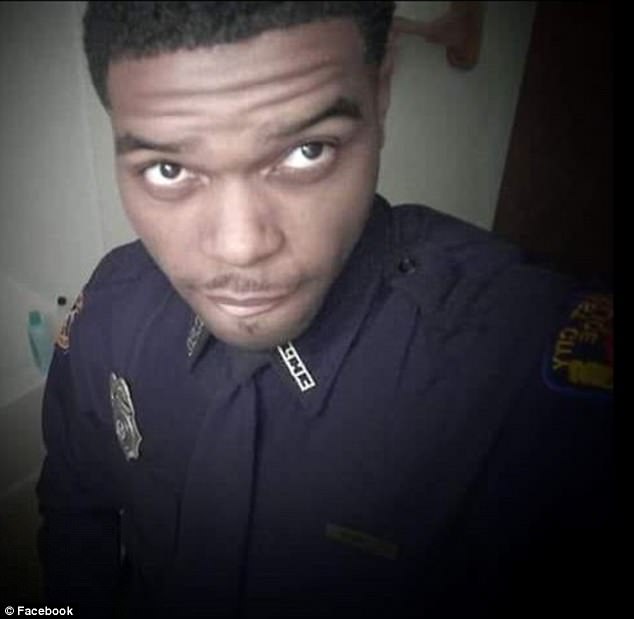 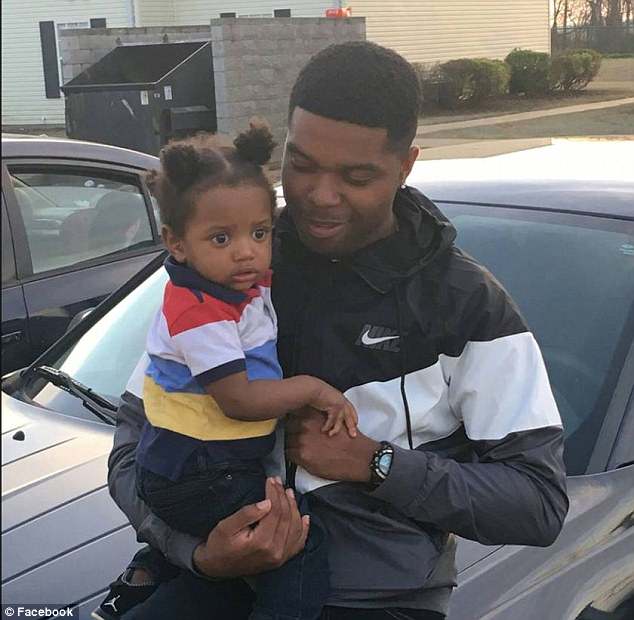 A relative performed CPR on Johnson, pictured above with his nephew before he was taken to the hospital where he was pronounced dead 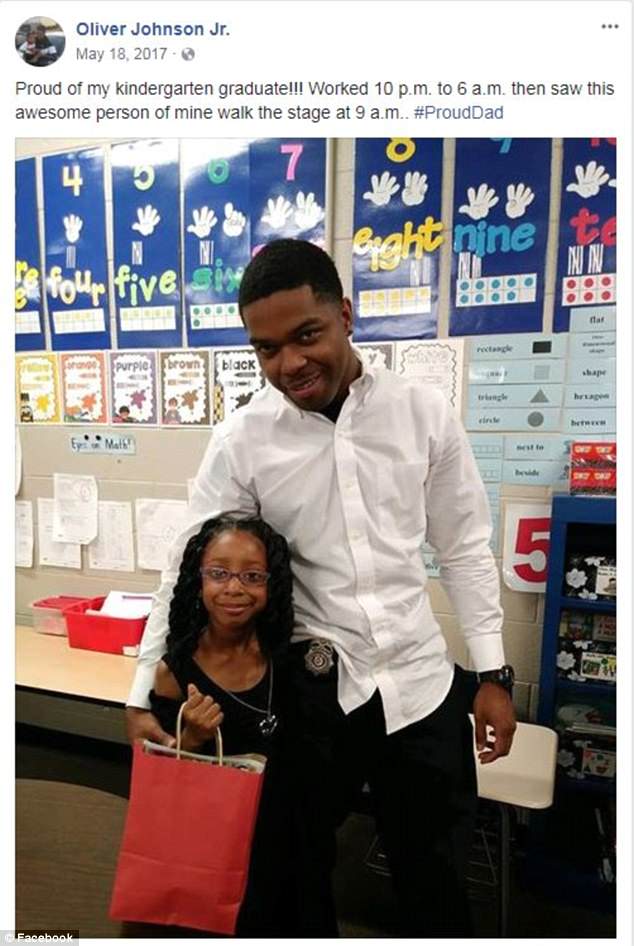 Johnson is survived by his two young daughters, one pictured above, and his fiancée 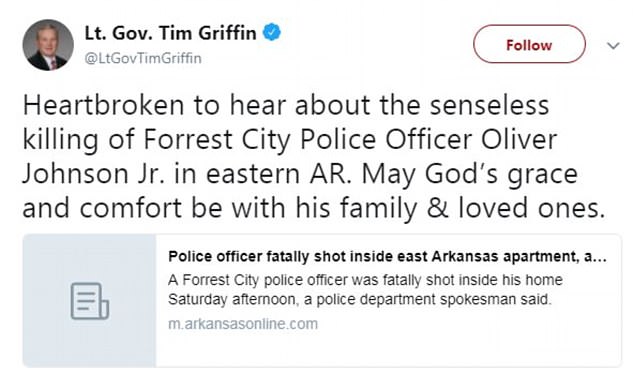 Forrest City Police cancelled events on Saturday with a ‘heavy heart’ after their officer was shot. The department is know looking for the suspects

Johnson is survived by his two young daughters and his fiancée. He and his fiancée were planning a birthday party for one of their children in the coming weeks.

‘Heartbroken to hear about the senseless killing of Forrest City Police Officer Oliver Johnson Jr in eastern AR. May God’s grace and comfort be with his family & loved ones,’ he said.

Johnson had been an officer with the Forrest City Police Department for more than two years.

The Department wrote on Facebook that it had to cancel events on Saturday ‘with a heavy heart… due to unforeseen circumstances.’