The majority of men, who buy a pretty lady a drink, tend to ask for her phone number with the intention of asking her out.

However, when Abby Fenton, 18, received a message from a guy who bought her a drink two weeks earlier, she thought he was asking her out. Instead, what the text message said was he wanted her to pay him back the $8.70.

According to Fenton, she was getting herself a drink when the guy known as Liam came over and said he’d buy it for her. He told her she was beautiful and she deserved to have a drink bought for her.

Fenton, who’s attending Leeds Becket University and studying biomedicine, said the pair apparently exchanged for numbers during that time. She said the text asked for the money back – that he give a sort code and account number. 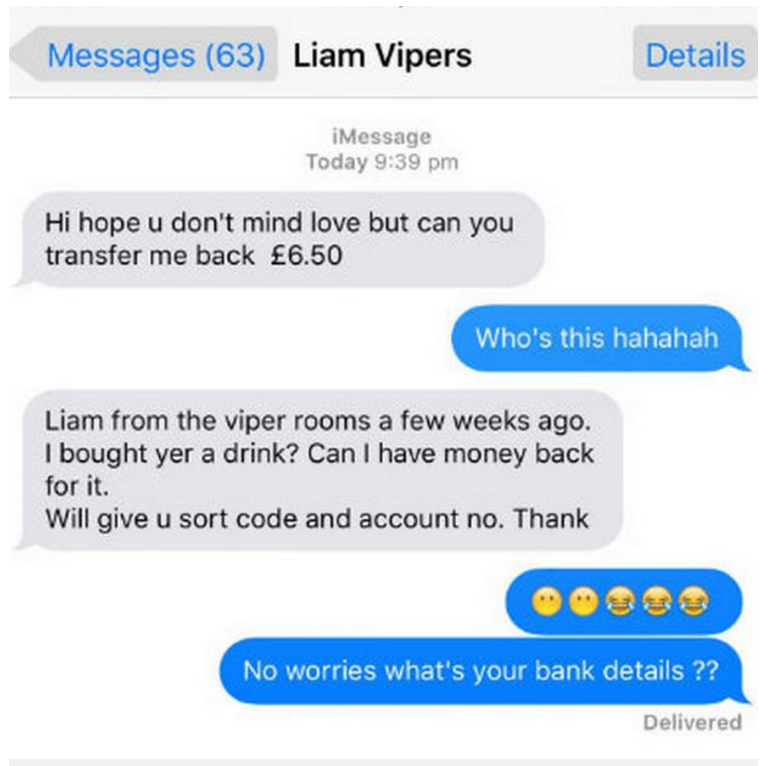 Fenton was a bit amused, thinking it was a joke.

However, she agreed to send him the money and Liam never contacted her again.

According to Fenton, she wasn’t going to initially, but realized he might actually need the money. She said the man wasn’t dressed all that well, and his shoes were Primark. Fenton said she believes he really did need the cash.

According to Viper Rooms Events Manager Dale Chandler, he saw the text in his news feed and decided to share it himself. He said it’s not uncommon for people to ask for money back if things don’t go like a person plans, but never quite like this.

Chandler said the man wasn’t even drunk and then asks for a refund two weeks later.