A 16-year-old schoolboy was subjected to a savage ‘honor’ beating by a group of Pakistani men after they found out he was secretly dating a girl from their family, a court heard.

The Bengali student was taken a prisoner and escorted to a cul-de-sac where he was repeatedly kicked about the head, battered with weapons and told: ‘Don’t mess with our blood – find someone your own kind.’ 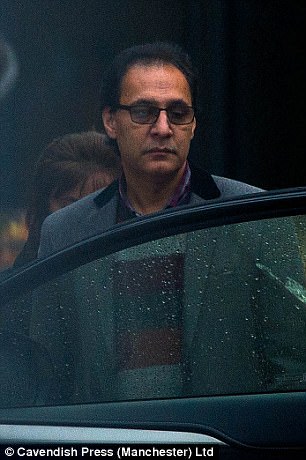 As the victim fought for his life onlookers – thought to include women – were heard shouting: ‘kill him, kick him in the head, finish him off.’

The beating continued after the attackers – which included the girl’s father, uncle, and brother – seized the boy’s mobile phone and searched it for evidence he had been dating the girl – a fellow pupil at their high school – and found pictures of them together.

The victim was eventually released when members of the lynch mob drove him away from the scene and dumped near a local barber’s shop.

The boy, from Blackburn, Lancashire, was later treated in hospital for injuries similar to those administered by a knuckleduster. He was left with a scar to his head and is now too scared to leave home by himself.

The girl’s brother, Khizum Baig, 29, her cousin Saqib Mirza Baig, 29, and Ghazanfar Mirza, 37, her uncle, all of Blackburn, all admitted affray. 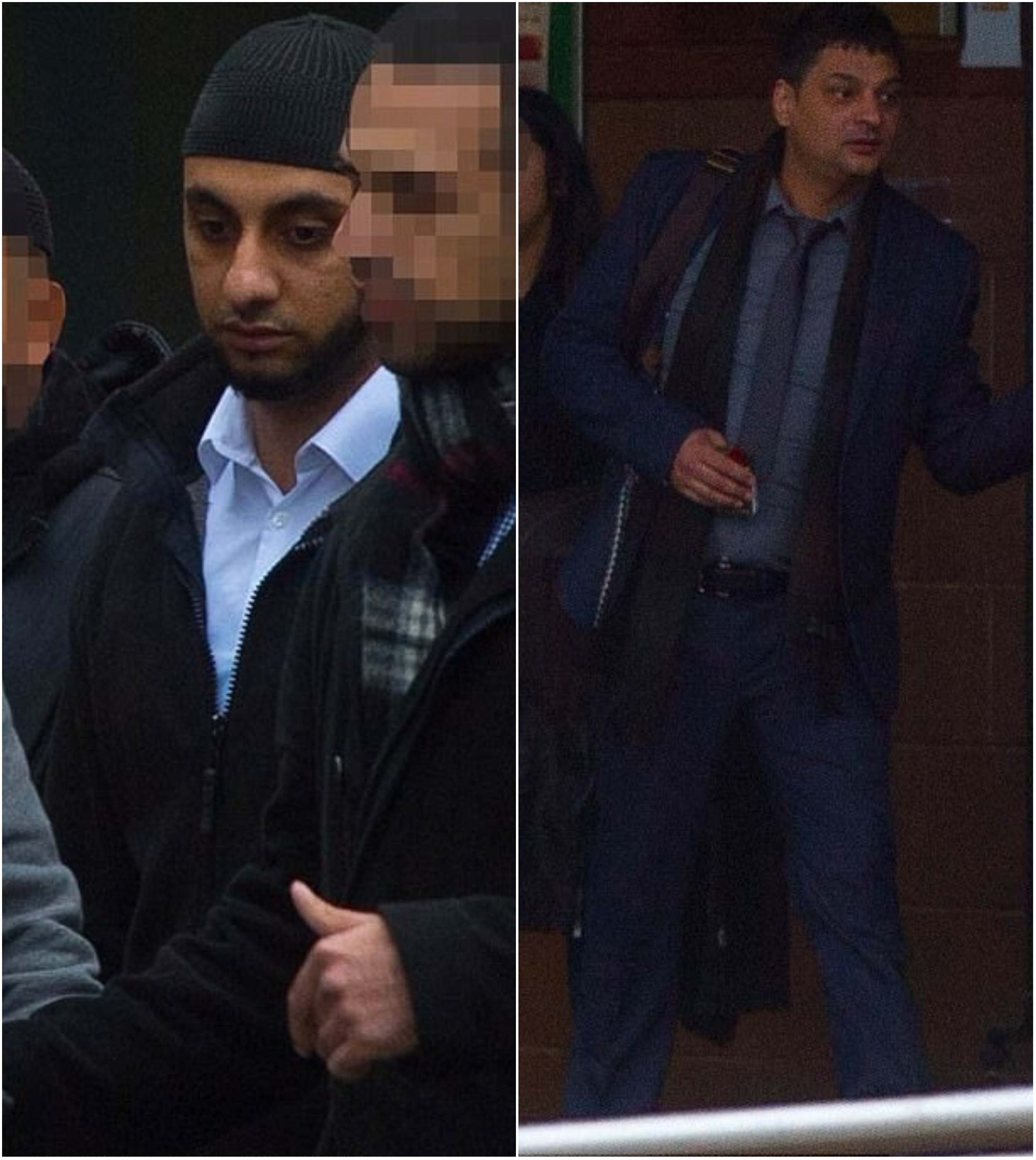 The court heard the boy – who cannot be named – had been targeted after he dated a 16-year old girl from the Pakistani community in Blackburn. The pair would secretly meet once a week and communicated mostly by mobile phone.

But on March 7 last year their forbidden romance was exposed when they were spotted together by the girl’s uncle Ghazanfar Mirza as he drove past. Father of seven Ghazanfar turned his car around and pulled over and asked his niece to get in the car and drove off.

But after dropping the girl off he then returned to confront the boy and asked him to get in the car. Nicholas Flanagan prosecuting said: ‘At this point the boy didn’t consider Ghanzafar to be aggressive and he seemed friendly so he got in the car.

‘But once they were in the car Ghanzafar locked the doors and sped off up the road telling him “you better not be f***ing with my niece”. He drove off at speed and the boy was unable to escape.

‘During the journey Ghanzafar was ringing the other defendants asking them for weapons and making it plain that violence was to be perpetrated. He drove to a close where he and Saqib Baig live. Mirza Baig and Khizum Baig then arrived after.

‘Saqib walked to the car where the window was down and demanded the boy’s phone and went through his messages and his calls. He found images of him and the girl together. Saqib leant through the open window and punched the boy several times to the face.

‘Another Male and two females were seen near the car and the boy heard Ghanzafar talking to people on the phone about weapons being brought. Mirza Baig then arrived and punched the boy in the nose. 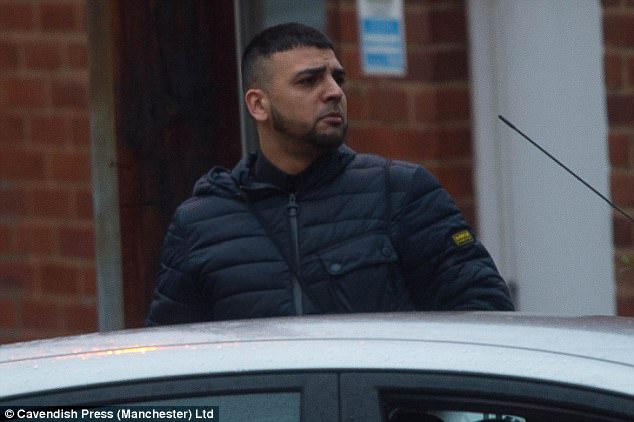 ‘There were comments of “finish him, kill him”. Saqib then dragged the boy out of the car and grabbed him by the neck and threw him on the floor. Again shouts of “kill him, kick him in the head, finish him off” were heard. He was repeatedly kicked to the head and body while he was on the floor. He tried to protect himself but was unable to get up.

‘Khizum kicked the boy three times while he was on the floor. When the attack stopped Ghanzafar told him to get in the car so he did. He was dropped off close to where he had been picked up. Fortunately a barber saw the state he was in and the police were called.’

Mr Flanagan added: ‘The boy is of Bengali heritage and all of the defendants are of Pakistani heritage and are all related to the girl in some way. The ethnicity of the boy is the background motive for the attack. Comments were made saying “don’t mess with our blood” and “find your own kind”. Both the boy and the girl were still at school and met at school and they were both young.

‘The fact that the girl was in a relationship may have been a motive or added motive. There are honour overtones to this incident.’

The court heard police tried to interview locals in the cul-de-sac but the only witness who assisted with the investigation was the victim himself.

He suffered bruising and lacerations to his ear face, lip, head and torso and at Royal Blackburn Hospital was found to have three large cuts to his head which were treated with staples. They were consistent with blunt force trauma caused by a knuckle duster.

In a statement the boy said: ‘I’ve lost my independence and I’m scared to leave home by myself. I’ve been fearful since the attack and have stopped socialising with friends. It’s had an impact on my schooling and I am self conscious of the scar on my head which causes me pain.’

A teacher at the boy’s school said he had been a ‘hard working, popular and well liked student’ who was now a quiet pupil whose ‘smile has disappeared.’

She added: ‘The attack has changed him as a person.’ 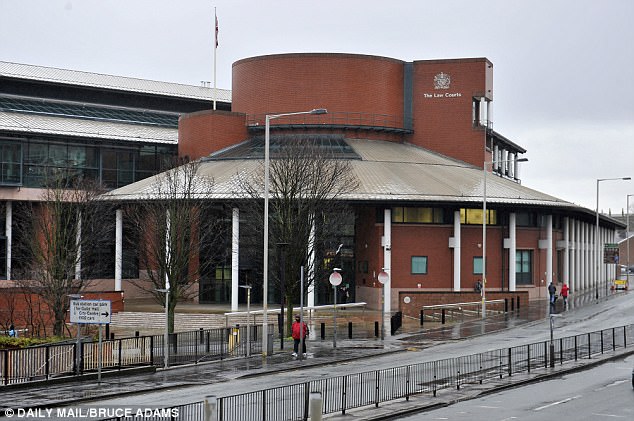 A school counsellor who helped the boy after the attack said the lad was ‘very anxious and scared.’ His father said he was previously a ‘jolly happy boy’ who would go to the gym frequently and play football. The father said: ‘It was distressing for me to see my son in hospital. He was a calm boy before this but now he loses his temper and frequently flies off the handle.

‘He won’t go to the gym by himself or walk anywhere alone.’

In mitigation for Ghazanfar defence counsel Thomas Stanway said his client was appealing his guilty plea and added: ‘He categorically denies any hostility to anyone of Bengali heritage. He accepts driving the boy to the address, but he thought that other family members wanted to speak with him. His brother was in a relationship with a Bengali woman and he was the one to sort out issues with the family.’

For Mirza Baig, a taxi driver, Robert Elias said: ‘This is not a case that had racial or honour causes. Honour cases are where the family do not approve of a relationship and punish the young girl.

‘This can’t be the case here because the girl was not involved. It has nothing to do with race, ethnicity or honour. He comes from a family of Sikhs, Muslims, Christians and Hindus and they all get along.

‘This relationship by the boy’s own evidence was a secret one and that was the concern and dismay for this defendant. That seems to be the trigger. But it wasn’t a serious relationship – it wasn’t Romeo and Juliet. He was concerned for the girl and that the family had not been introduced or told about this boy.’

For college student Saqib Baig, Andrew Nuttall said: ‘The racial aspect as far as this defendant and his family are concerned is ridiculous as his his own brother is married to a Bengali woman himself. He lost his temper because he heard the victim had disrespected the girl in front of her family and he found it offensive.

For Khizum Baig, Howard Shaw said: ‘He bitterly regrets getting involved and knows this was a grave error. He got swept along through loyalty to the family.’

The four men will be sentenced next week and were remanded in custody.