A Brighton, Michigan car dealership put up a sign that discouraged motorists from giving money to a panhandler after he refused a job offer.

The Honda dealer put the sign on one of their vehicles – a picture was taken and has gone viral.

Morgan Holt took a picture of the sign to share with friends. Holt said she drives by the panhandler on a daily basis and he’s been outside the dealership for two years. She posted on Reddit, and it garnered 60,000 views and more than 5,000 comments in seven hours. Before long, it showed up multiple social media websites.

The sign implored people not to give money or anything to the panhandler after he turned down a full-time $10 an hour job, citing that he made more money than the employees did. He refused to take a job. It also asked that people donate their money to something worthier. 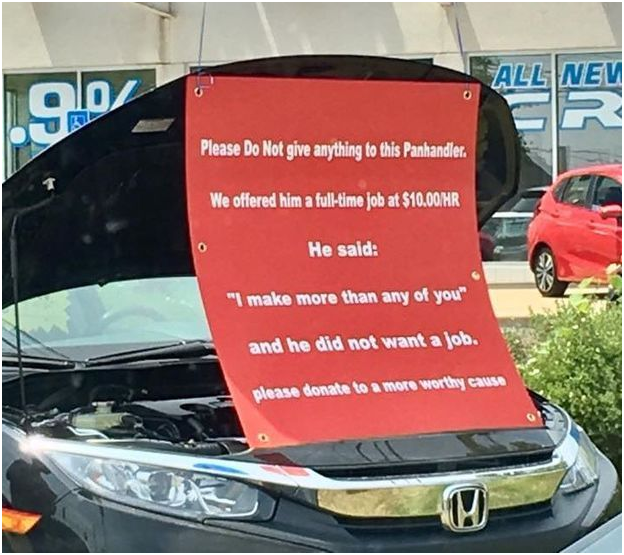 Although the dealership did offer the man a job and their assertion that an unemployed person should be obligated to take any job they can get, it appears the panhandler’s choice to turn it down was smart… financially.

David Spears, 33, works as an economic assistant for the United States Bureau of Labor Statistics in the Portland Office. Spears carried out an experiment, becoming a panhandler to see how much money he would make.

Spears, who has a double major in political science and economics, carried out his research before his senior year on the Oregon City exit ramp. He wore tattered clothes, a bushy beard and held a cardboard sign that read, “Iraq Vet – Anything Helps.” Spears is actually a two-time decorated Iraq War veteran. 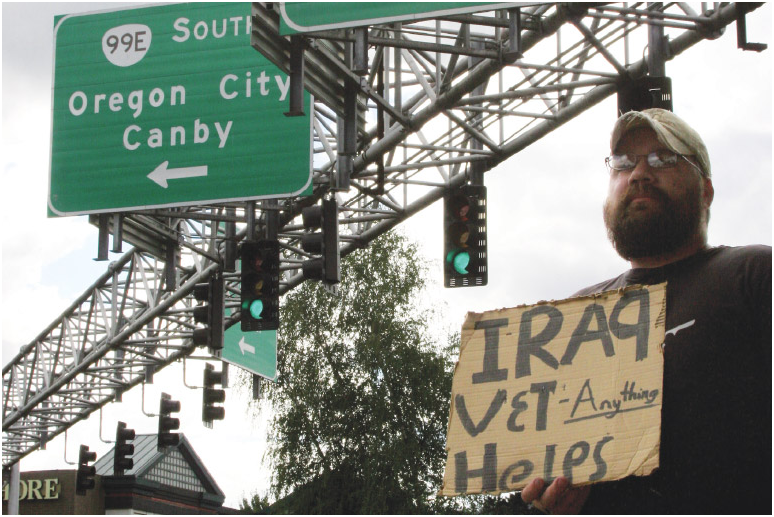 He stayed there for 12 days, begging people for money. He ended up averaging $11.10 an hour – Oregon’s minimum wage is $8.95 an hour. It was also more than what the Honda dealership in Michigan had offered to the panhandler.

He published a book about the findings, “Exit Ramp: A Short Case Study of the Profitability of Panhandling.” In the book, he said donations ranged from mere pennies to $100. Spears said his worst days netted him $5.13 an hour where his best days brought in $24.63 an hour. He said one in every 59 people that passed him would give him money. It was typically middle-aged people that would give more money. And, both genders tend to give equal amounts.

Spears said he was surprised by how much and often people gave. He said the theme’s study wasn’t just about how much one earned panhandling but the amount of generosity still in the American culture.