An Arkansas mother and father were arrested and charged with child neglect after their baby was bitten over 100 times by rats.

Charles Elliott, 18, and Erica Shyrock, 19, are both facing one charge of endangering the welfare of a minor after their baby was taken immediately to the hospital.

KARK reports that an emergency room nurse informed authorities that a 15-day-old baby was admitted to the hospital with horrendous bite marks on her face, fingers, hands, and arms. One of the head bites was apparently so deep that some of her skull could be seen.

Elliot’s mother talked with authorities and discovered Elliot was afraid to do anything because of losing custody of the baby.

Shyrock told investigators she woke up to her baby girl crying and screaming. She ran to the room and found the infant covered in blood and bloody rat footprints in the crib.

According to authorities, Elliott and Shyrock knew their home was infested with rats but refused to take action to protect their daughter. Authorities looked at the home and discovered that, along with the bloody rat footprints, a baby blanket, and hat. 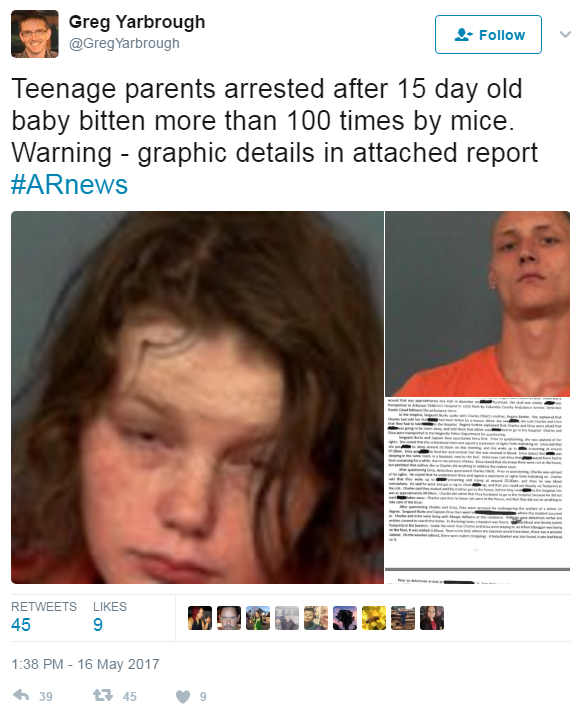 An Arkansas Children’s Hospital doctor said the infant actually suffered from serious skin deconstruction that came from hours and hours of rat feeding. Doctors talked with investigators, saying the seriousness of the infant’s injuries is consistent with parental neglect – parents who were either not present when their child was attacked or incapacitated.

The story was shared on Facebook where people expressed their outrage over the child’s injuries. Commenters mentioned the mother’s picture, saying she looked incapacitated and unable to stay sober enough to take a picture, much less take her child to the hospital.