Several student reporters in a Kansas school district recently investigated their soon-to-be-principal and found some disturbing news about her credentials.

Their discovery led to her decision to resign from the district.

Amy Robertson was set to become the Pittsburg High School principal but instead turned her resignation into the school board who accepted it. According to Robertson, her decision to resign was based on the district’s best interest regarding the potential controversy over her where she attained her master’s and doctoral degrees. 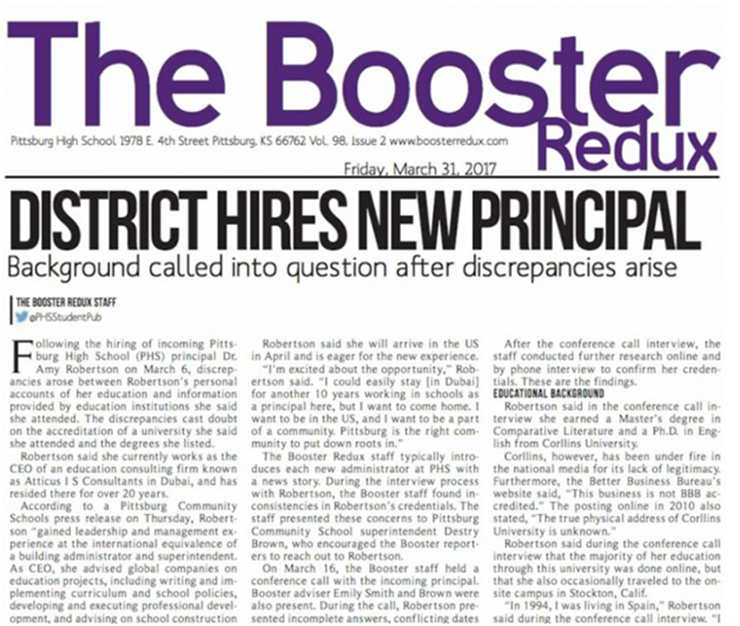 Robertson attained them from Corllins University, which is an unaccredited, online school. According to Robertson, the degrees were earned before the accreditation was pulled from the university – one in 1994; the other in 2010.

Pittsburg High School student and newspaper editor Trina Paul said she was going to be head of the school and the students wanted to be sure she had the right credentials and was qualified to do the job. She said the reporters came across information that led them to suspect her credentials were not authentic.

Superintendent Destry Brown commended the students for their reporting, saying the kids asked questions and didn’t accept what somebody told them. Brown said the students had excellent researching skills.

Robertson would not comment on the students’ findings, saying the concerns they had were not fact-based.

An anonymous letter raising questions about her qualifications had circulated, with Brown’s office addressing concerns. He said it was the students’ reporting that increased the vetting process.

According to Brown official transcripts are generally not requested until a hiring decision is made; but, in light of what happened, the vetting process is likely to change.

Emily Smith is the Pittsburg journalism advisor. Smith said she was quite proud of the students. What they discovered wasn’t meant to do anyone harm or cause problems.