Children’s Hospital in Philadelphia is making big efforts to find the answer to this question.

A few unlucky families showed up on Action News to share with the public their alarming issues. According to their story, their children have had neuropsychiatric symptoms after consuming the laxative MiraLAX. Some doctors prescribe this medicine on a regular basis to children under 17, though it’s not recommendable.

The FDA has revealed shocking information. Apparently, the exact toxic substances you can find in anti-freeze are also present in this medicine.

The doctors prescribed MiraLax to their small patients – children, though they had another laxative as a choice. And the reaction to the medicine turned their once healthy children to aggressive and cheerless ones.

“Near psychiatric events with paranoia, mood swings, aggression, rage,” was what a parent, Jeanie Ward said.

“I feel like my son was absolutely robbed of most of his childhood,” Jessica Aman of Chester Springs, Pa. said.

“He had the rage, fears, phobias, anxieties,” said Sarah Locatelli, a parent.

Nicole Ward consumed MiraLAX for ten days. She was only 3 and a half at the time. She turned into an angry, even paranoid child.

“It was horrifying to see my daughter change like that and to not come completely go back to normal,” Jeanie Ward said.

Nicole Oerkfitz, 19 years old from North Wales, Pa., said: “I was a very, very happy child. When I was 2, I was running around playing. In second grade I started hating everybody. I wanted to kill everybody. I’m mad that this happened to me.”

According to parents, the pediatricians often prescribe MiraLAX, despite the fact that It’s not typically recommended for children younger than 17. And also, their usage limit is seven days.

Natalie Saenz is one of the parents who trusted the doctor and not the medicine label. Her daughter had been using it for eight months.

“All of a sudden, she started having this weird ticks,” said Saenz.

In order to share experiences and opinions, parents made their own group on Facebook. The group has more than 3000 members. The parents also sent their protest to institutions such as the FDA.

Jeanie Ward supported an FDA petition. The aim is to ask for caution label as well as a thorough examination of MiraLAX.

“I think they are poisoning our children,” Ward claimed.

The FDA recorded 167 negative reactions, including 37 neurological and psychiatric ones. They also found ethylene glycol as well as diethylene glycol. These ingredients are also discovered in antifreeze. CHOP took this case for investigation.

As Action News reports, the FDA states that they “take the health and welfare of pediatric populations very seriously,” and are sure that the label “accurately conveys the risks.”

Now, it turns out they have “insufficient data to demonstrate a link between PEG 3350 and serious neuropsychiatric issues in children.”

Though hospitals tried to contact the doctors from CHOP, the hospitals now say “they can’t comment because the study is incomplete; “also, “they will submit their findings to the FDA.”

“I trusted the medical community and they absolutely robbed me of part of my fatherhood,” Koehler told.

Meanwhile, the parents, as well as some doctors, are afraid of the further usage of this dangerous laxative, so they continue their fight.

“It breaks my heart cause I know how I felt and I didn’t want anyone else to feel that way,” Oerkfitz said.

Bayer, being responsible for the production of MiraLAX gave an explanation about the dosing of this laxative. According to their statement, MiraLAX should be used by adults and children older than 17, not longer than seven days. Of course, unless the doctor prescribed different dosing. 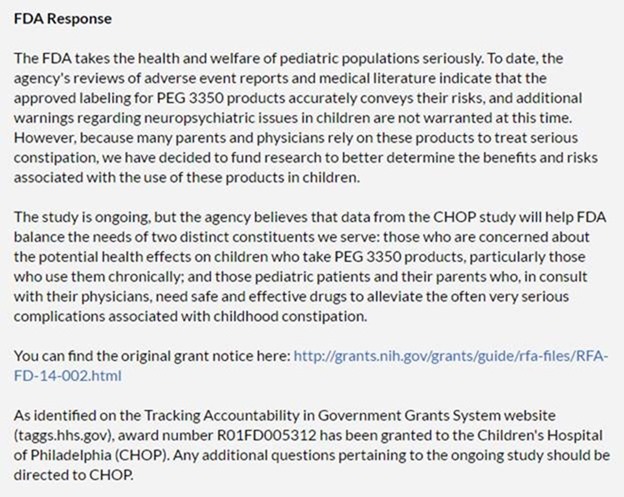 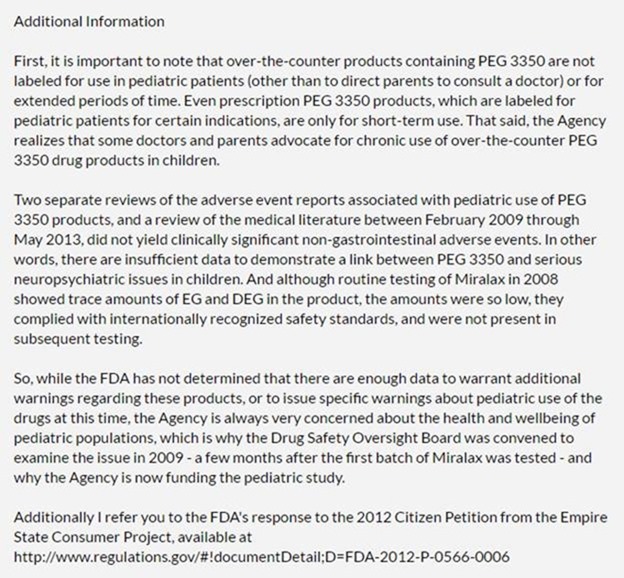 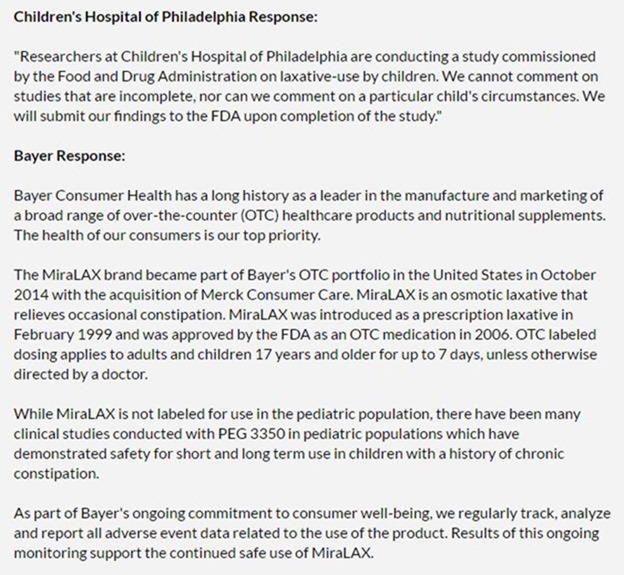 This story needs to be shared, please get it out there by pressing below