Slobodan Praljak, 72, a Bosnian-Croat war chief, killed himself with poison during his war crimes trial at The Hague. “He was ‘easily’ able to smuggle the deadly liquid into the building,” a prominent lawyer says.

It is unclear how the man obtained the poison while he was serving his 20-year sentence in an undisclosed UN prison cell. Each day he was driven to the court in a secure van for his appeal hearing.

Praljak yelled, “I am not a war criminal!” and drank a dark liquid from a small bottle seconds after losing his appeal. He was up against a 20-year prison sentence at the International Criminal Tribunal in the Netherlands.

“I just drank poison,” he added. “I am not a war criminal. I oppose this conviction.” 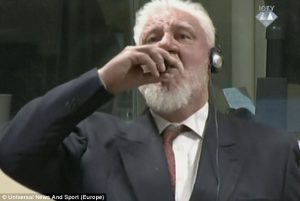 Shock: Slobodan Praljak, 72, shouted ‘I am not a war criminal!’ and brought a small bottle to his lips during a Yugoslav War Crimes Tribunal in The Hague, Netherlands 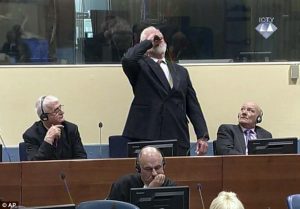 Protest: Fellow convicts Bruno Stojic and Milivoj Petkovic, sitting on either side of the Croat politician, look on in shock and surprise as he downs the contents of the bottle

Prominent Serbian lawyer Toma Fila said  it would be easy to bring poison into the court because security for lawyers and other court staff  “is just like at an airport.”

“Security officers inspect metal objects and confiscate cell phones, but pills and small quantities of liquids would not be registered,” Fila said.

Praljak was one of six Croatian politicians sentenced to jail for their involvement in a campaign to drive Muslims out of a Bosnian Croat mini-state in the early 1990s.

Praljak’s lawyer shouted out “My client has taken poison” before judge Carmel Agius suspended the hearing and closed the courtroom. Moments later, an ambulance crew arrived on the scene and a helicopter began hovering overhead. Emergency rescue workers rushed into the building.

A spokesman confirmed he died after “He drank a liquid while in court and quickly fell ill.”

Nenad Golcevski added: “One of the six defendants… passed away today in the HMC hospital in The Hague” despite efforts to save him in hospital.

Praljak died in hospital in the Netherlands, a statement which was later confirmed by Prime Minister Andrej Plenković as he offered condolences to his family. 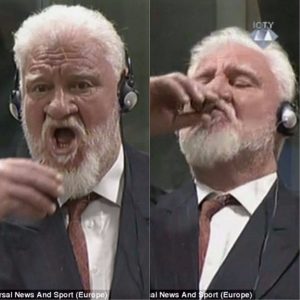 Praljak appeared to drink the poison seconds after losing his appeal at the International Criminal Tribunal for the former Yugoslavia, in The Hague, Netherlands 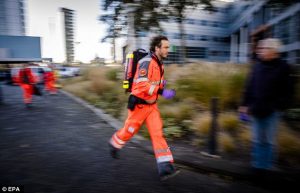 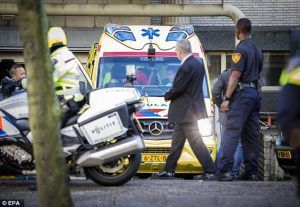 Several medical vehicles were seen outside the court while a helicopter hovered overhead, but Croatian state TV reported medics were unable to save Praljak

Mr. Plenkovic said at a press conference that “we have all, unfortunately, witnessed his act by which he took his own life.”

“His act mostly speaks about a deep moral injustice towards six Croats from Bosnia and the Croatian people … We voice dissatisfaction and regret about the verdict.”

Judge Agius declared the courtroom a crime scene. Dutch police also said an investigation had been launched. Praljak was sentenced to 20 years in jail along with his co-conspirators in 2013, though it is not clear if he began serving that sentence before his appeal. Bosnian Croats and Muslims were allies against the Serbs and fought each other for 11 months from 1993-1994.

Praljak, a Croatian politician and general in the Croatian Army, commanded Bosnian Croat forces known as the HVO from July to November 1993.

Praljak and his allies were trying to establish the “Croatian Republic of Herzeg-Bosnia – an ethnically Croatian enclave, with the city of Mostar as it’s capital.” 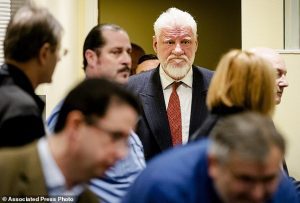 Slobodan Praljak, center, enters the Yugoslav War Crimes Tribunal in The Hague, Netherlands, Wednesday, to hear the verdict in the appeals case

In 1993, the Herzeg-Bosnia republic was declared by the Bosnian Croats as part of the peace agreement in 1994. They merged with the Federation of Bosnia and Herzegovina that we know today.

Nearly 80 percent of the city’s east side was destroyed in the fighting. Mostar saw the worst of the Croat-Muslim clashes.

Praljak was specifically charged with ordering the destruction of Mostar’s 16th-century bridge. In November 1993, the judges in the first trial had said he “caused disproportionate damage to the Muslim civilian population.”

As a symbol of Bosnia’s devastation, the Ottoman-era bridge was later rebuilt. In their ruling, the judges allowed part of Praljak’s appeal, saying the bridge had been a legitimate military target during the conflict.

“It’s just an old bridge,” Praljak said in 1993, showing no regard for the emotional effect the destruction had on ordinary Bosnians of all ethnic backgrounds.

Praljak was a Bosnian Croat writer and film and theater director turned wartime general. He also said he worked as a professor of philosophy and sociology.

He was found guilty of crimes including murder, persecution and inhumane treatment as part of the plan to drive Muslims out of a would-be Bosnian Croat territory in Bosnia.

Two Serbs have taken their lives while in the tribunal’s custody. 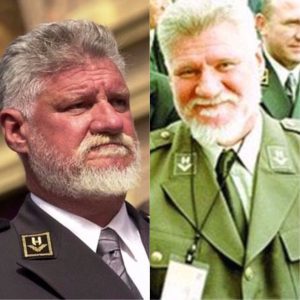 Praljak, a Croatian politician and general in the Croatian Army, also commanded Bosnian Croat forces known as the HVO from July to November 1993 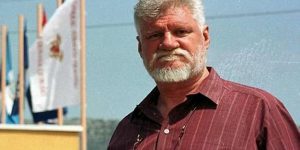 Praljak and his allies were trying to establish the ‘Croatian Republic of Herzeg-Bosnia’ – an ethnically Croatian enclave, with the city of Mostar as it’s ‘capital’, during the Bosnian War

Slavko Dokmanovic, a Croatian Serb, was charged in July 1998, in the deaths of over 200 Croat prisoners of war, was found dead in his prison cell in The Hague.

Milan Babic, a wartime Serbian leader also took his life in a prison tribunal cell in March 2006. Wednesday’s hearing was the final case at the groundbreaking tribunal before it closes its doors next month.

The tribunal which convicted former Bosnian Serb military Chief Gen. Ratko Mladic of genocide and other crimes,  while fighting still raged in the former Yugoslavia. It indicted 161 suspects and convicted 90 of them. The appeals judges upheld the Croatia’s late President Franjo Tudjman, a member of the plot to create a Croat mini-state in Bosnia.

That finding angered Croatian leaders but was largely overshadowed by Praljak. The original trial began in April 2006 and provided a complex web of ethnic tensions that fueled fighting in Bosnia and underlies frictions in the country even today. 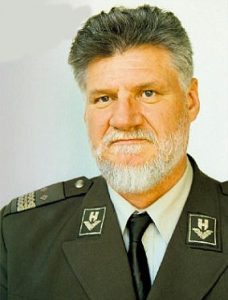 Guilty: Slobodan Praljak was one of the leaders of plot to create a Croatian republic in Bosnia-Herzegovina

Slobodan Praljak, 72, was born in Capljina, a small town in Bosnia-Herzegovina close to the Croatian border. He worked as a film and TV producer as well as a lecturer in Zagreb before he joined the Croatian army in 1991 advancing to Major General.

Croatian Deputy Minister of Defence was later assigned to Croatia’s State Commission for relations with the United Nations Protection Force (‘UNPROFOR’) in March 1992.

Praljak was brought before the Yugoslav War Crimes Tribunal accused of establishing and participating in creating an ‘ethnically pure’ Croatian republic within modern Bosnia-Herzegovina between 1991 to 1994.

The UN tribunal eventually found him guilty of the above as well as participating ‘in the ethnic cleansing of the town and municipality of Prozor, of the municipality of Gornji Vakif, of the towns of Sovici and Doljani, and of the municipality of Mostar, notably by attacking Bosnian Muslims, by the pillage and theft of their property, by massive arrests and by inflicting upon them cruel treatment, sexual violence, killings and other forms of persecution.’

He was Head of the Bosnian Croat forces known as the HVO and was responsible for several prison camps where Bosniak Muslims were detained and abused. Some of which was so severe that inmates died in the camps.

On April 5, 2004, Slobodan Praljak voluntarily surrendered to the International Criminal Tribunal for the former Yugoslavia (ICTY).

He was then charged with nine counts of grave breaches of the Geneva conventions, including wilful killing; inhuman treatment (sexual assault); unlawful deportation and confinements of civilians – nine counts of violations of the laws or customs of war – including cruel treatment unlawful attack on civilians and unlawful infliction of terror on civilians – and eight counts of crimes against humanity – including persecutions on political, racial and religious grounds; murder; rape; deportation; inhumane acts and imprisonment.