Traveling through the airport is rarely ever a blast, but in this particular instance, it was “horrifying” for a Mom who had to watch her son get an intense pat down by a TSA(Transportation and Security Administration) agent.

The mother, Jennifer Williamson, requested an alternate screening process by the TSA employees at the Dallas Fort-Worth airport for her special needs son.

The boy suffers from a sensory disorder and can respond temperamentally to touch. Apparently, the son kept his laptop in his backpack instead of taking it out and placing it by itself in an airport bin.

It was at this point when the TSA decided to administer an extensive pat-down of the boy. The Mother said it was a “horrifying” interchange, and that her family was treated “like dogs” throughout the ordeal where they missed their flight due to the delay. Two cops from the DFW police force were brought over to decrease Williamson’s worries.

The video reveals an employee of the TSA giving Williamson’s boy a thorough physical screening. The agent patted his back and down his legs and hindquarters and then his front. Williamson posted that her family was delayed over an hour from the whole unpleasant episode.

TSA challenged the mother’s story, writing in a statement how Williamson’s family took 45 minutes to clear security, which included the examination of their carry-on luggage and the time needed to go over verifying measures.

In the statement, the TSA stated the employees used the acceptable protocol in the situation. Based on the agency’s account, the boy’s security pat-down was only 2 minutes long.

“The video shows a male TSA officer explaining the procedure to the passenger, who fully cooperates,” TSA declared in the release.   They continue, “Afterward, the TSA officer was instructed by his supervisor, who was observing, to complete the final step of the screening process.” 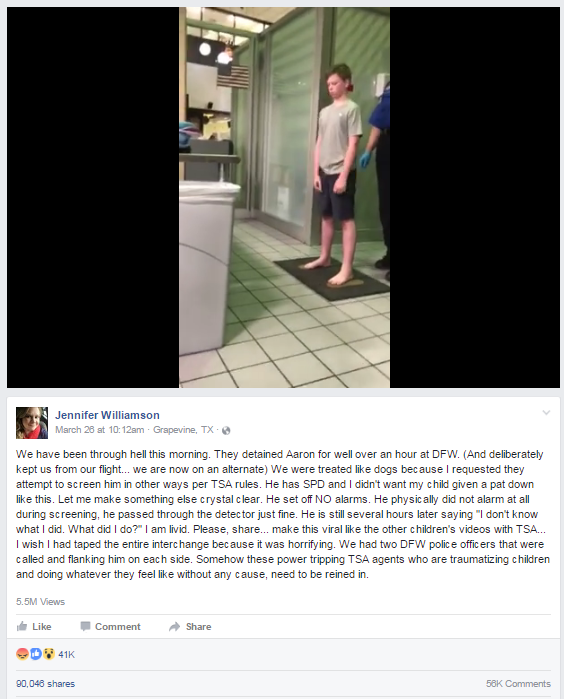 “Let me make something else crystal clear,” Williamson said in her post. “He set off NO alarms. He physically did not alarm at all during screening, he passed through the detector just fine. He is still several hours later saying ‘I don’t know what I did. What did I do?’ I am livid.”

She also stated in the FB post that the “power tripping” employees who work for the TSA need to be “reined in”.

What do you think about this?  Start a conversation by hitting SHARE below