A woman working for a facilities management company was fired from her job after her tattoo of a butterfly was seen on her foot.

Jo Perkins, 38, said her employers at Salisbury FM knew, when they hired her, that she had a tattoo on her left foot. 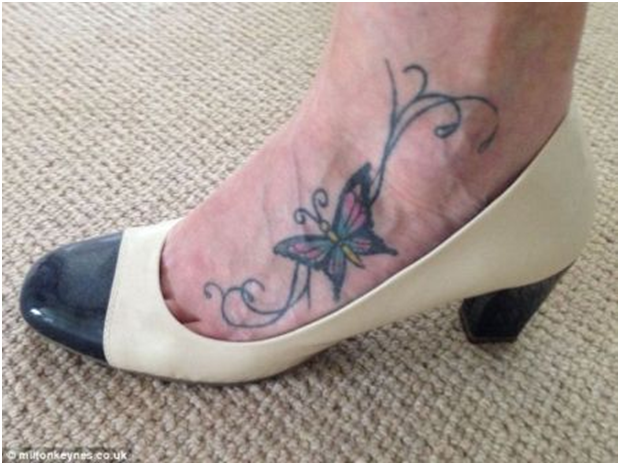 Perkins said several months after she began working at the company, they enacted a rule that keeps employees from displaying their tattoos while at work.

Company Chief Executive Ed Swales said the rule was meant to help the company retain an air of professionalism, and employees must cover their tattoos while at work. He said Perkins did not make an effort to comply with the company’s new policy.

For her part, Perkins said covering her tattoo while trying to follow the professional dress code was a bit difficult to do. She said the only way to cover it was to use a sock. She said, as a businesswoman, she wear smart dresses to work and wearing socks would look dumb. Perkins said she thought of trying a sticking plaster but felt it would be unprofessional and bring more unwanted attention to the tattoo.

Perkins said she came to work one day, with the tattoo showing and learned she had been terminated. She was also escorted out of the building. Perkins is considering legal action against the company, claiming they were being discriminatory. She said, during the five months she was employed, she’d repeatedly been praised for her performance.

Perkins said she’s worked for several high-level companies but never heard of something as ridiculous as this rule. She feels the action is discriminatory under diversity and inclusion laws.