There are many ways to describe certain mental issues with words and art, but how about architecture?  That’s what digital artist Federico Babina has done with his project named “Archiatric”.

There are a set of works that show many different mental conditions illustrated by certain types of architecture.  Many of the people actually affected by these problems have commented that these are spot on. 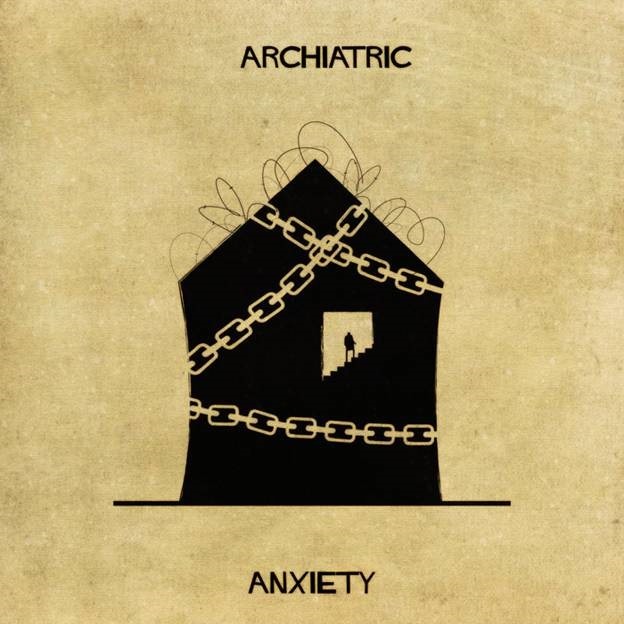 The feeling of anxiety is depicted here as a “chained up”, to likely describe the feeling of not being able to adequately express yourself or even function when having anxiety. 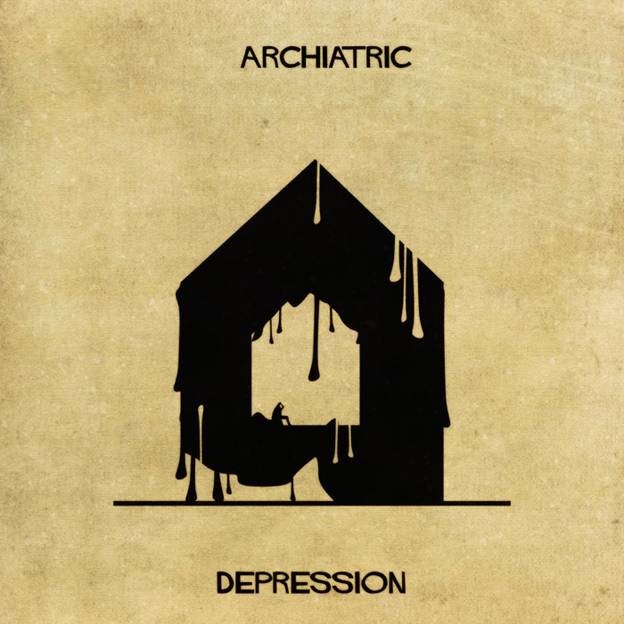 Depression has been put by many as a sinking feeling, and even melting away. 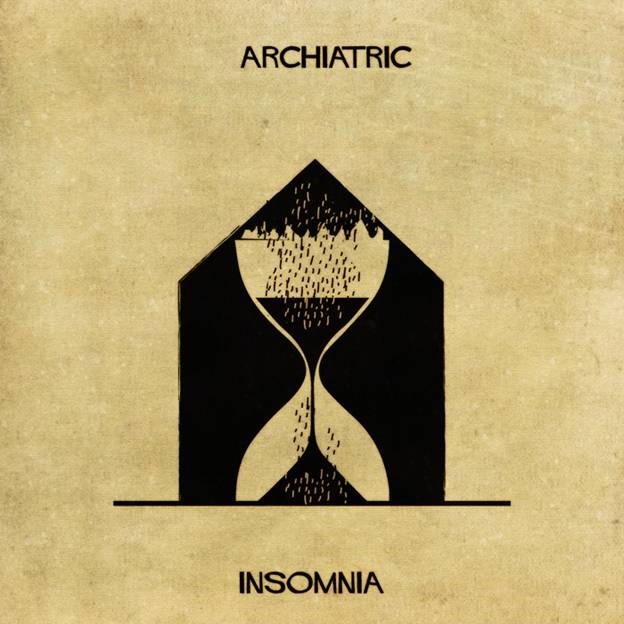 When we can’t get any sleep and are having serious trouble sleeping, we are waiting out the sand in the hourglass.  Minutes can seem like hours, and hours like days. 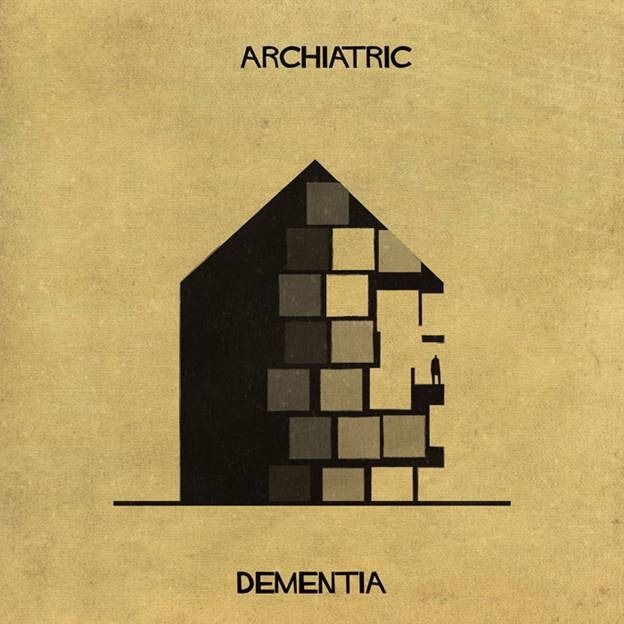 Dementia is such a rough condition because we lose parts of our memory and in turn parts of ourselves.  This picture is a perfection representation of that. 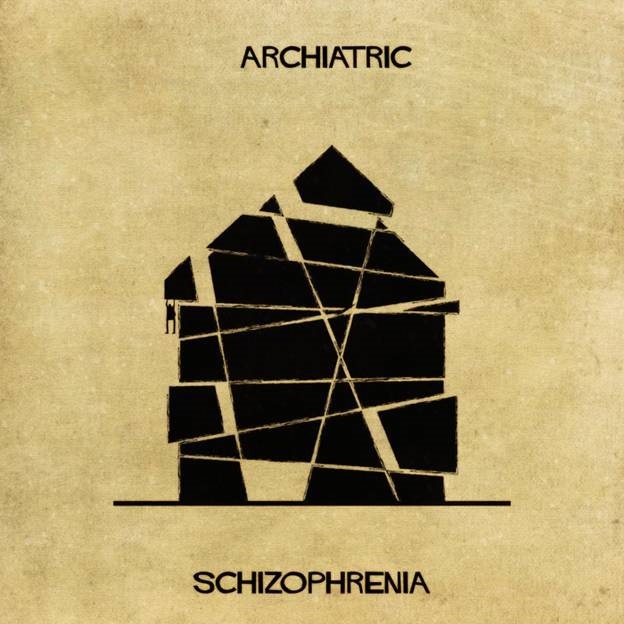 Schizophrenia is defined as “a long-term mental disorder of a type involving a breakdown in the relation between thought, emotion, and behavior, leading to faulty perception, inappropriate actions and feelings, withdrawal from reality and personal relationships into fantasy and delusion, and a sense of mental fragmentation.” As you can see, the picture almost captures the definition perfectly. 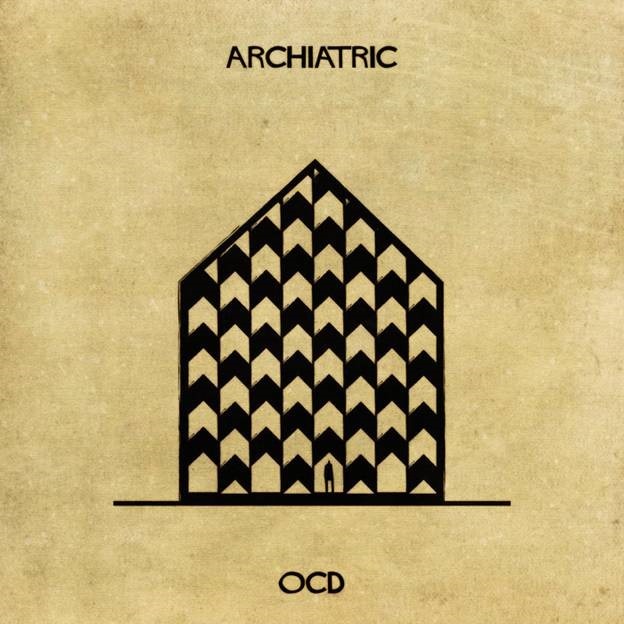 This may actually bother some individuals with OCD, seeing as the top of the house is not perfect.  Having OCD, or obsessive compulsive disorder means that you have compulsions, undesired feelings and thoughts, which causes those afflicted to obsess over trivial things.  These compulsions and obsessions in many cases make little to no sense. 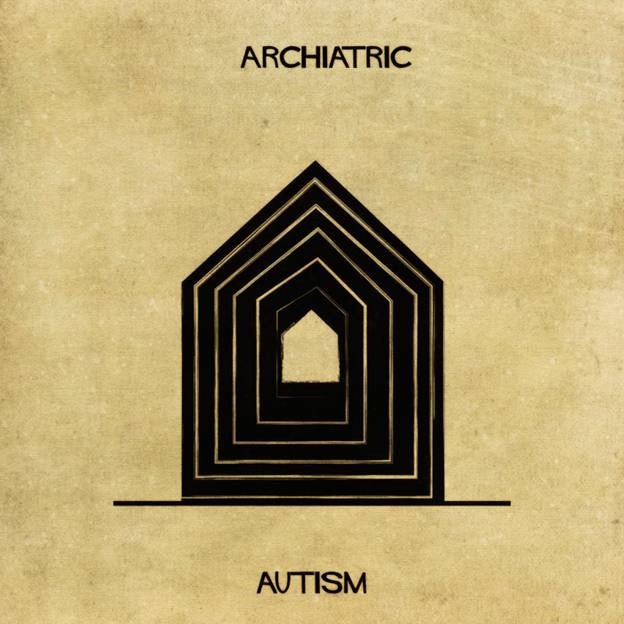 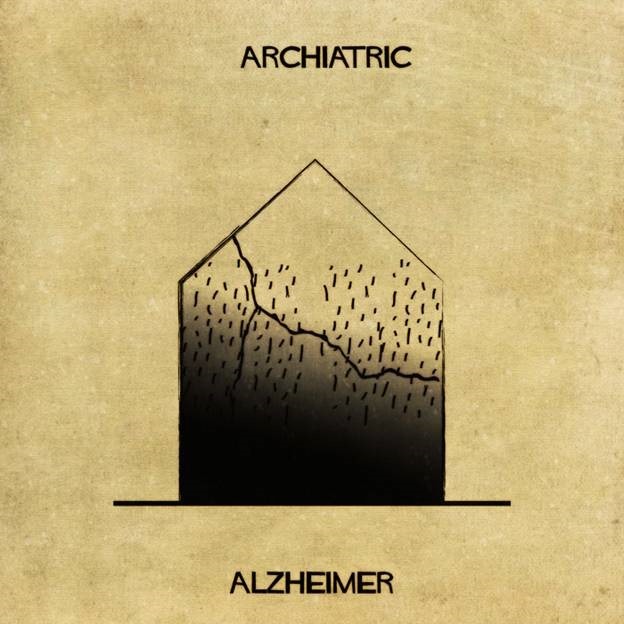 Alzheimer’s here is depicted as a crack, and half the house going dark.  This is very illustrative of the horrific disease and it’s degenerative and the mind slowly falls apart and starts to lose more and more memory and function, ie. goes dark, over time. 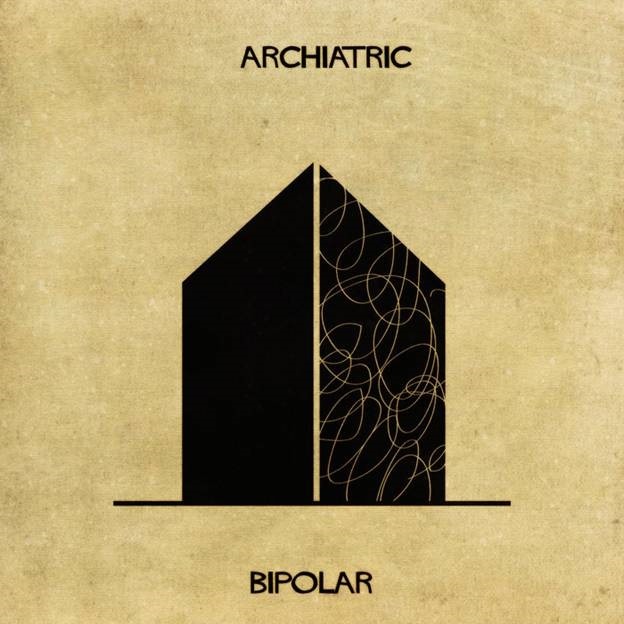 When there are two polar sides to something, it can be described as bipolar.  That’s what is shown here and it encapsulates the very different feelings one may have, then the starkly different feeling they may have shortly after that. 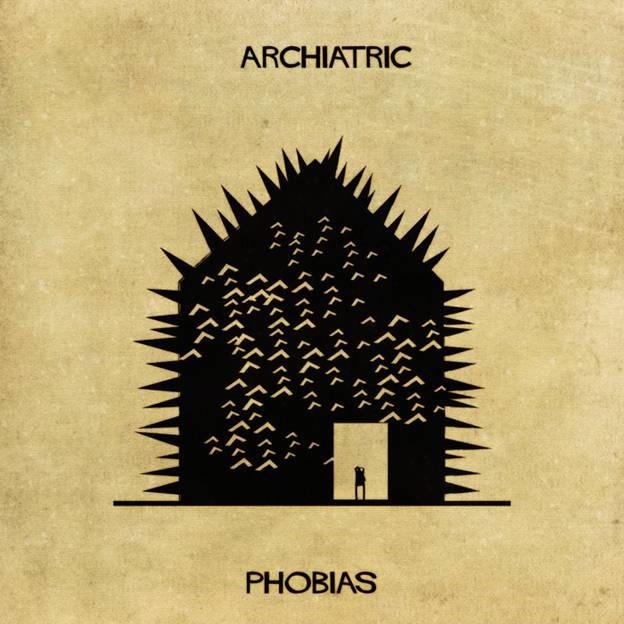 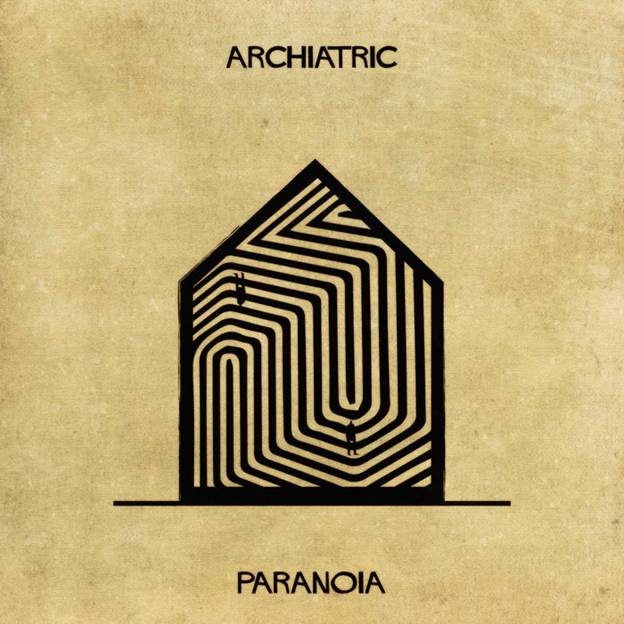 Sometimes when we’re paranoid we have an irrational fear, and it’s like we’re lost or don’t know what’s going on. 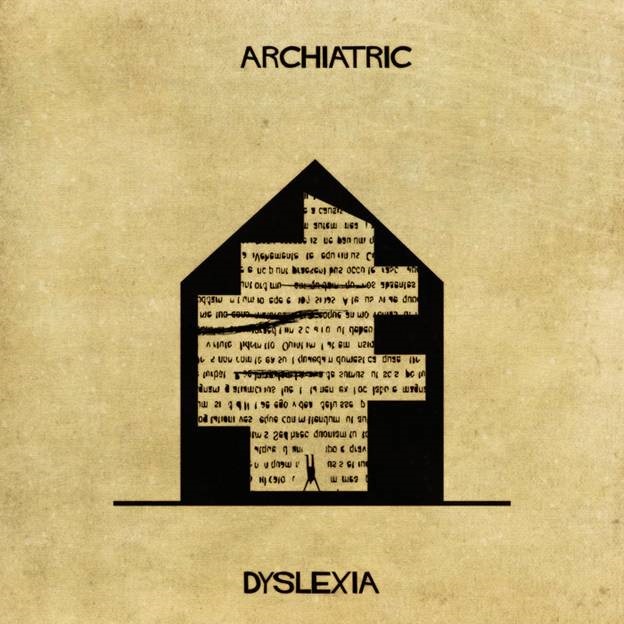 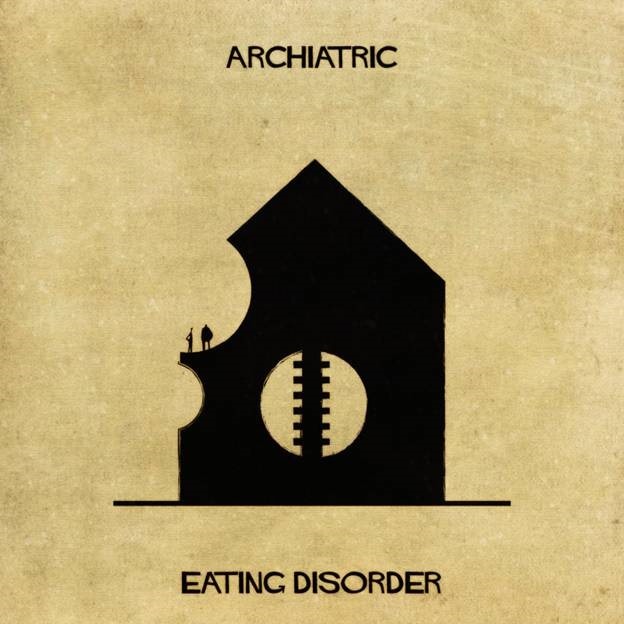 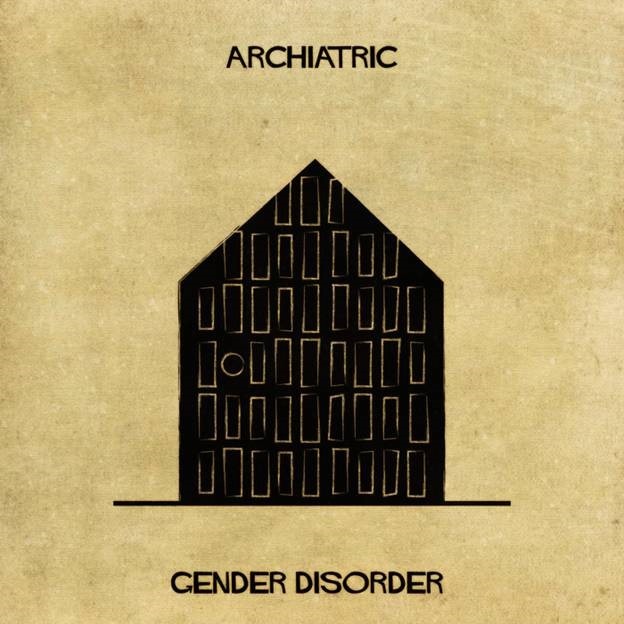 If you have this disorder, you may feel extremely out of place, which is captured by this one circle amongst many rectangles. 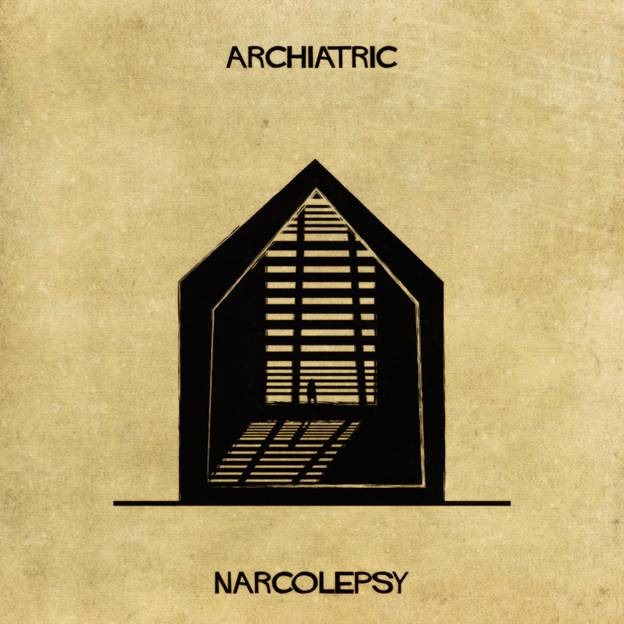 Check out this video by Federico for an animated version of all of these!