A new hero is born! Kelly Heron, 36 bravely defended herself when a man tried to sexually abuse her. The whole thing happened in the stall of a public toilet. As she fought against the attacker, she screamed: “Not today, motherf***er.”

“All those little things that I learned in my life … how to punch and everything came back to me,” said Heron to ABC News. “I started to feel like I was going to lose consciousness … but I got another surge of adrenaline, and I reached for the door and was able to get out.” 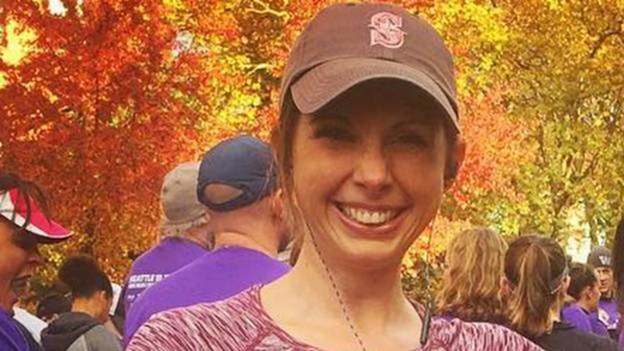 Heron was jogging as she was preparing for the Seattle Marathon. At some point, she stopped her training in order to use the public restroom. Then, a most terrible nightmare started. A man with a mask tried to take her clothes off: “He immediately took me down to the ground, hit both my knees and legs, and then it was a fight on the bathroom floor, and I just kept screaming, ‘Not today, motherf***er,'” Heron continued her story for ABC News.

The man is known to police as a registered sexual attacker, Gary Steiner, 40.

Luckily, she made a strenuous effort and after some of the crucial moves she learned in the classes of self-defense, Heron managed to protect herself.

“I got into that stall, flipped on my back, and I tried to kick the door lock shut with my foot,” she remembered. As she didn’t hit the door lock, the abuser managed to come back. He was striking her across her face.

Then, she decided to return the blow and began to scratch his face. Finally, she found her way out from the restroom. She even managed to lock the attacker inside thanks to a passerby.

Steiner was arrested for the assault and rape attempt. He’s in a jail with a $750,000 bail.

Jordan Giarratano, an Instructor for Fighting Chance Seattle said in an interview: “This is one of the most surreal things I’ve ever seen … in the four years I’ve been running this workshop. It’s very inspiring and overwhelming and humbling.”

Giarratano also pointed out the importance of intuition, loud and quick reaction, as well as fighting really hard with open hands.

Despite this terrible experience, Heron continued with her training.

“My face is stitched, my body is bruised, but my spirit is intact,” she wrote in her Instagram post.