President Trump plans to implement the death penalty for major drug traffickers as part of his opioid crackdown in the United States, the White House announced Sunday. 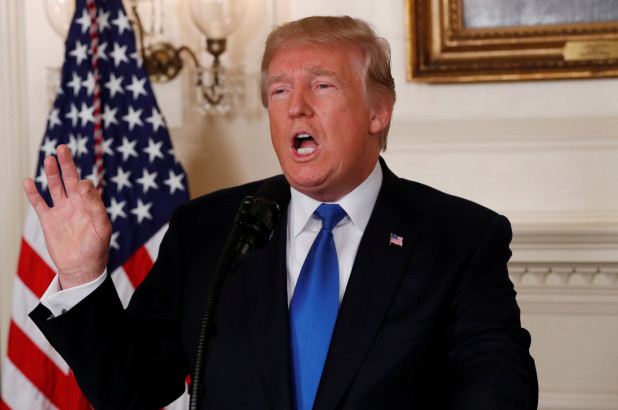 “The Department of Justice will seek the death penalty against drug traffickers when it’s appropriate under the current law,” said Andrew Bremberg, White House director of the Domestic Policy Council.

Trump has often praised dictatorships in China and the Philippines for stamping out drug problems with capital punishment.

Earlier this month, Trump said the opioid epidemic would be far less widespread in the US if drug dealers were just killed.

“Some countries have a very, very tough penalty, the ultimate penalty — and by the way, they have much less of a drug problem than we do,” Trump said.

The White House declined to give examples of when the death penalty would be appropriate under Trump’s plan and referred inquiries to the Department of Justice.

Federal law already permits the death penalty for certain offenses like murder, terrorism and a large-scale drug enterprise, but capital punishment is rarely used on the federal level.

Trump also wants to increase criminal penalties for pushers of the deadly drug fentanyl, which can be lethal in even small quantities.

“The president will call on Congress to pass legislation that reduces the threshold amount of drugs needed to invoke mandatory minimum sentences for drug traffickers who knowingly distribute certain illicit opioids, including fentanyl that are lethal in trace amounts,” Bremberg said Sunday on a call with reporters.

Trump will roll out his plan Monday to end the epidemic that killed more than 42,000 people in 2016 on a visit to New Hampshire, which has been hard hit by the opioid crisis.

The plan also calls for the launch of a public awareness campaign about the dangers of drugs, supporting research to develop a vaccine to prevent opioid addiction and cutting nationwide opioid prescriptions by one-third within three years.

Often the prescription painkillers that doctors recommend after a surgery become the gateway to drug addiction for their patients.

The White House also wants to ensure first responders are supplied with naloxone, the lifesaving medication used to reverse overdoses, and will seek changes to the Medicaid law to boost access to inpatient treatment.

The plan — which did not have a price tag — would require federal inmates to be screened for opioid addiction at intake to better connect offenders with treatment.