Starbucks employees at a Dilworth, North Carolina location are accused of poking fun at a customer for her political belief.

Kayla Hart said she visited the store in June wearing her “Trump for President 2016” short. She said the cashier laughed at her while taking her order for an iced tea. When the cashier typed up her name on the cup, it read, “Build A Wall,” a mockery of the new president’s controversial campaign promise to build a wall between Mexico and the U.S. and have Mexico pay for it.

Hart said employees called out, “Build A Wall” and shoved her drink at her. She said the baristas in the back started laughing. She said she walked out because people were staring at her. 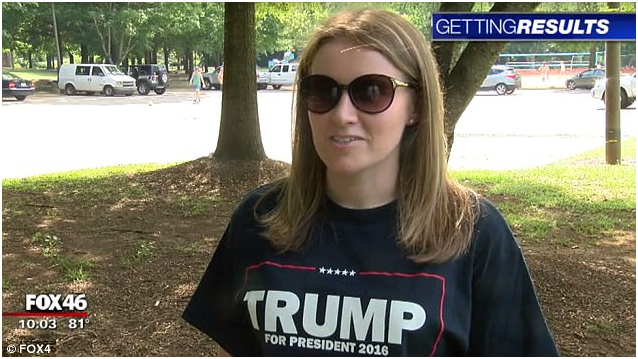 Starbucks’ customer service released a statement saying the company failed to meet the expectations their customers have of them and they apologize for the behavior. The statement said they have reached out to the customer about her experience and are working to make things right. It read that this was not typical of their standards or the inviting atmosphere that they want people to have in all their stores.

According to the statement, Starbucks management has reached out to its store partners about the incident and are using it as a coaching tool to avoid potential problems later on.

Hart said she wouldn’t boycott the popular coffee chain. She said she wanted people to know what was happening, and didn’t feel that being humiliated for wearing an opinionated t-shirt was right.

Trump made a suggestion once in 2015 that boycotting the company was necessary because of its use of an ordinary red cup for the holidays. He said there were no religious symbols or Merry Christmas on the coffee chain’s cups.

Howard Schultz, the Starbucks CEO, is known for his liberal thinking as opposed several of Trump’s policies. For instance, he announced that the company would hire 10,000 refugees around the world in response to Trump’s executive order of banning refugees from certain countries to come to the U.S.