Last week Apple issued an unprecedented apology following its admission that it slows down older iPhones to save battery life.

Now, it appears the Cupertino-based firm will replace all batteries in the iPhone 6 or later – even if it passes their Genius Bar diagnostic test.

An internal memo states customers should receive a battery for $29 (£25) – even if a diagnostics tests prove it can retain more than 80 percent of its original capacity.

It comes as the firm faces several lawsuits from customers in states including California, New York, and Illinois, as well as customers in Israel and France. 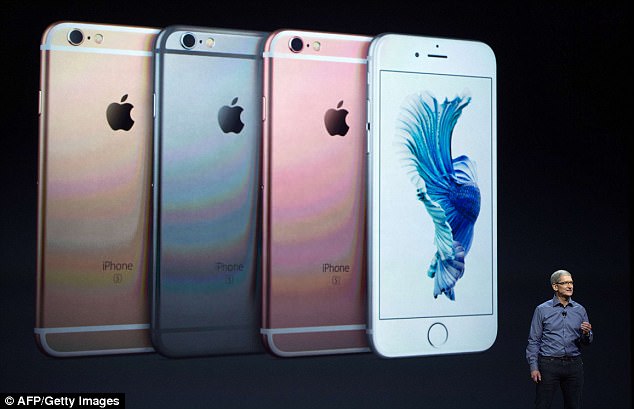 Last week Apple issued an unprecedented apology over its handling of the admission it slows down older iPhones. Now, it appears the Cupertino-based firm will replace all batteries in the iPhone 6 or later – even if it passes their Genius Bar diagnostic test. This image shows CEO Tim Cook at the launch of the iPhone 6 on September 9, 2015

The concession was made two weeks after the firm admitted it ‘throttles’ phones to extend their life and stop them from shutting down as batteries age and become less effective, triggering lawsuits across the world.

Last week the company published a letter saying ‘We know that some of you feel Apple has let you down’, and revealed it is planning to show users exactly how much their battery has degraded.

To appease angry customers, Apple said it is reducing the price of an out-of-warranty iPhone battery replacement by $50 — from $79 (£79) to $29 (£25) — for anyone with an iPhone 6 or later whose battery needs to be replaced.

However, a new report by French website iGeneration suggests that as of yesterday Apple will replace batteries even if they pass their diagnostics test.

Apple users can run a diagnostics test remotely so you don’t need to visit an Apple store. To initiate this, contact the firm or schedule an appointment using the Apple Support App.

Reports suggest customers who paid to have their batteries replaced before the announcement are eligible for a refund on request.

Earlier models such as 5, 5S and 5C are not covered.

‘We apologize. There’s been a lot of misunderstanding about this issue, so we would like to clarify and let you know about some changes we’re making’, the company said. 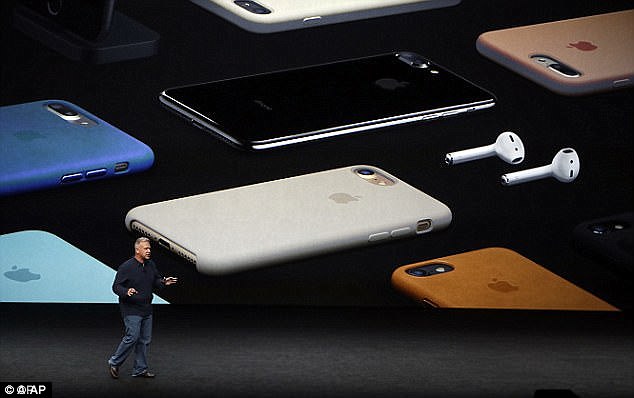 Last week the company published a letter saying ‘We know that some of you feel Apple has let you down’, and revealed it is planning to show users exactly how much their battery has degraded. Pictured is the iPhone 7

‘First and foremost, we have never — and would never — do anything to intentionally shorten the life of any Apple product, or degrade the user experience to drive customer upgrades,’ Apple said.

‘Our goal has always been to create products that our customers love, and making iPhones last as long as possible is an important part of that.’

Early in 2018, it will issue an iOS software update with new features that give users more visibility into the health of their iPhone’s battery, so they can see for themselves if its condition is affecting performance.

The firm said two weeks ago that it slows down phones to extend their life and stop them from shutting down as batteries age and become less effective, triggering lawsuits across the world.

In addition, a South Korea’s Communications Commission has reportedly asked for an explanation of the issue from Apple, while in France a consumer group has filed preliminary, legal complaints in court.

‘We are hoping to get some answers on whether Apple intentionally restricted the performance of old iPhones and tried to hide this from customers,’ the Korean Commission said.

HOP said it filed its complaint against Apple in Paris last week.

A prosecutor opened an investigation into Epson in November, a judicial source said on Thursday, following a complaint filed in September by HOP in a court in the Paris suburb of Nanterre.

Laetitia Vasseur, co-founder of HOP, told Reuters the aim of both complaints was to apply the French consumer law, which was modified in 2015 to include the notion of planned obsolescence.

Apple is already facing lawsuits in the United States over accusations of having defrauded iPhone users by slowing down devices without warning to compensate for poor battery performance.

Under French law, companies risk fines of up to 5 percent of their annual sales for deliberately shortening the life of their products to spur demand to replace them.

All the US lawsuits – filed in U.S. District Courts in California, New York, and Illinois – seek class-action to represent potentially millions of iPhone owners nationwide.

A similar case was lodged in an Israeli court last month, the newspaper Haaretz reported.

One of the lawsuits, filed in San Francisco, said that ‘the batteries’ inability to handle the demand created by processor speeds’ without the software patch was a defect.

The problem now seen is that users over the last year could have blamed an aging computer processor for app crashes and sluggish performance – and chose to buy a new phone – when the true cause may have been a weak battery that could have been replaced for a fraction of the cost, some of the lawsuits state.

‘If it turns out that consumers would have replaced their battery instead of buying new iPhones had they known the true nature of Apple’s upgrades, you might start to have a better case for some sort of misrepresentation or fraud,’ said Rory Van Loo, a Boston University professor specializing in consumer technology law.

But Chris Hoofnagle, faculty director for the Berkeley Center for Law & Technology, said in an email that Apple may not have done wrong.

Pointing to a device with a security flaw as an example, he said, ‘the ethical approach could include degrading or even disabling functionality.’

The lawsuits seek unspecified damages in addition to, in some cases, reimbursement.

Stefan Bogdanovich and Dakota Speas from Los Angeles have filed a lawsuit with the US District Court for the Central District of California.

They are accusing Apple of interfering with their devices without consent.

The pair are trying to get the case certified to cover all people in the United States who owned an Apple phone older than the iPhone 8.

Their application for the lawsuit states: ‘Plaintiffs and Class Members never consented to allow Defendants to slow their iPhones.

A second lawsuit, filed by five plaintiffs in the Northern District of the State of Illinois, accuses Apple of deliberately keeping its power management features under wraps to persuade people to upgrade to newer devices.

‘Apple’s iOS updates purposefully neglected to explain that its purposeful throttling down of older model devices and resulting lost or diminished operating performance could be remedied by replacing the batteries of these devices,’ the lawsuit states.

‘Instead, Apple’s decision to purposefully slow down or throttle down these devices was undertaken to fraudulently induce consumers to purchase the latest iPhone versions of the iPhone 7, as well as new phones such as the iPhone 8 and iPhone X .’

In a statement sent to MailOnline last week, a spokesman for Apple said: ‘Our goal is to deliver the best experience for customers, which includes overall performance and prolonging the life of their devices.

‘Lithium-ion batteries become less capable of supplying peak current demands when in cold conditions, have a low battery charge or as they age over time, which can result in the device unexpectedly shutting down to protect its electronic components.

‘Last year we released a feature for iPhone 6, iPhone 6s and iPhone SE to smooth out the instantaneous peaks only when needed to prevent the device from unexpectedly shutting down during these conditions.

‘We’ve now extended that feature to iPhone 7 with iOS 11.2, and plan to add support for other products in the future.’