The Trump administration announced Monday that it will crackdown on green cards for immigrants who’ve spent more than a year on food stamps, Medicaid or other public benefits designated for low-income residents.

U.S. officials argued that the rule change will make migrants more self-sufficient, while White House claimed it was merely enforcing a ‘Clinton-era law’ to protect the social safety net.

However, the state of California says it will sue to protect the rights of its residents. 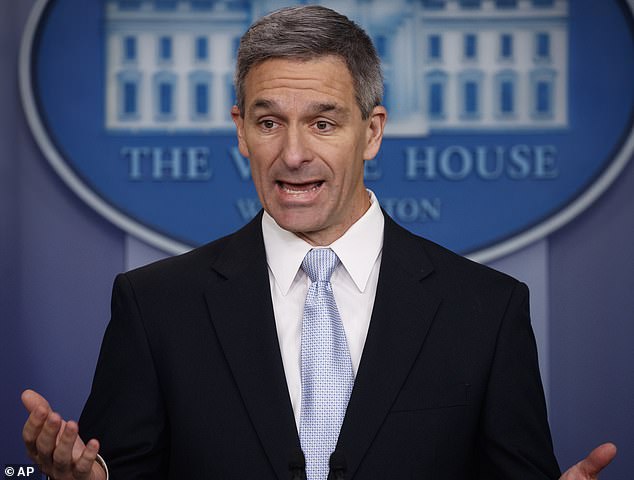 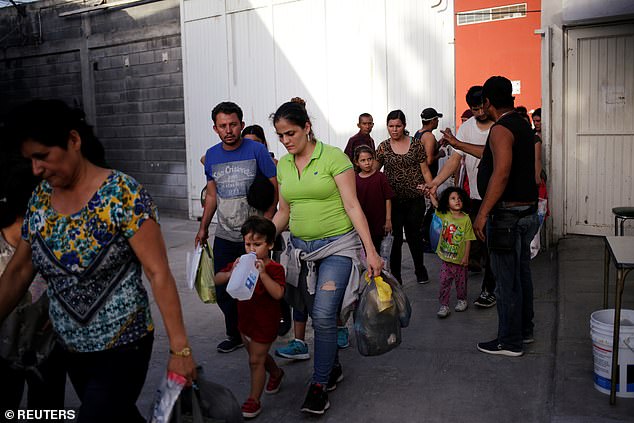 The Trump administration is cracking down on green cards for immigrants who’ve spent more than a year on food stamps, Medicaid or other public benefits designated for low-income residents 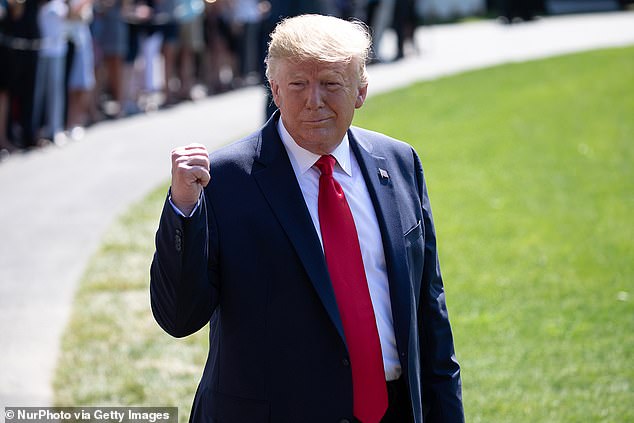 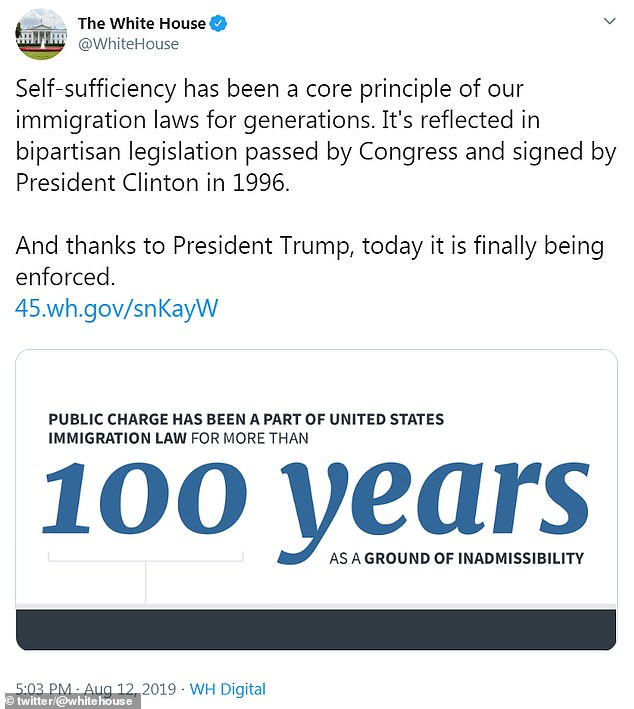 Ken Cuccinelli, the acting director of U.S. Citizenship and Immigration Services, said earlier in the day that beginning Oct. 15 any ‘individual who receives one or more designated public benefits for more than 12 months in the aggregate within any 36 month period’ will not be eligible for a green card.

Individuals who take two public benefits will see that time cut in half, he explained during a briefing at the White House.

‘Our rule generally prevents aliens who are likely to become a public charge from coming to the United States or remaining here and getting a green card,’ he stated.

Public benefits are defined in the rule as a state, local and federal income-based assistance and some non-cash benefits.

It does not include benefits for children and pregnant women like the National School Lunch Program or The Special Supplemental Nutrition Program for Women, Infants, and Children (WIC), Cuccinelli said.

Medical assistance, disaster relief, homeless shelters, and Head Start are not part of the rule.

The rule will take effect on Oct. 15 and Cuccinelli said that career officials processing forms will not consider certain non-cash benefits that migrants received prior to that date.

Age, health, family status, assets, resources, financial status, education, and skills will all be assessed in the application process, he said.

‘No one factor alone will decide an applicant’s case,’ he said of the green cards.

Additionally, migrants that do not meet the qualifications will have the option to adjust their status to that of a Legal Permanent Resident (LPR) through the purchase of a public charge bond that the government plans to sell for a minimum of $8,100 a person, and possibly more, depending on the individual’s circumstances.

Cuccinelli insisted that the new rule will ‘help promote immigrant success’ and ‘self-sufficiency’ of immigrants seeking to become Americans.

It’s that same ‘hard-working spirit’ that’s made the U.S. a beacon, he claimed.

Refugees and asylums seekers will not be affected, nor will human and sex trafficking victims. An exemption for members of the military and their spouses will also be made.

The administration first signaled that it would seek to adjust the legal definition of a ‘public charge’ in September 2018 to make the standards for citizenship more rigorous than they had been.

‘Congress has never defined the charge public charge in the law,’ Cuccinelli said Monday. ‘Well, that is what changes today with this rule.’

He announced, ‘Through the public charge rule, President Trump’s administration is reinforcing the ideals of self-sufficiency and personal responsibility. Ensuring that immigrants are able to support themselves and becoming successful in America.’

Essentially, U.S. officials are seeking to isolate immigrants they suspect will be a burden to taxpayers by taking citizenship and the legal rights that come with it off the table for needy migrants.

Cuccinelli said that the rule update will merely ensure that existing law is ‘meaningfully enforced’ and puts into effect the authority that Congress has already given the administration.

It claimed that non-citizens are abusing welfare benefits intended for poor Americans and taking advantage of the nation’s generosity.

The White House said that that 58 percent of all households that fall into this category are using at least one welfare program and half have at least one person on Medicaid.

The process of creating a chain of people who might not have the kinds of workplace skills that a growing and industrialized economy warrants.

He also wants to do away with the diversity visa lottery system, that picks applicants for approval at random.

They’re heavily vetted by the State Department before they’re approved for residency. The president has claimed for years, incorrectly, that countries are sending over degenerates.

His administration has been working on legislation for the last year that would make legal immigration point and merit-based, to help increase the number of immigrants coming over who are contributing to American innovation and GDP growth.

That pitch is still at the starting gate, and his administration has, in the meantime, sought other means to make the United States a less attractive option for poor migrants.

‘We’ve been pressing ahead, and this rule is an example of that,’ the president’s immigration and naturalization head said.

Cuccinelli denied that the rule’s implementation is not an admission by the White House that the reforms to the president are seeking to the legal immigration system will not happen.

He said that the administration is relying on Congress to take action to stiffen asylum regulations, for instance.

The Monday morning announcement that his agency would force migrants to choose between the possibility of citizenship and putting food on the table had liberals up in arms.

The Center for American Progress invoked the El Paso shooting, which a suspected killer said in a manifesto came as a response to an ‘invasion’ of Hispanic immigrants coming to America, in a statement decrying the new green card rules.

‘In El Paso, we saw the painful consequences of this climate of hate,’ said Philip Wolgin, managing director of Immigration Policy at the Washington, D.C. think tank. ‘Today’s action illustrates that the Trump administration will stop at nothing to attack immigrants and people struggling to make ends meet.’ 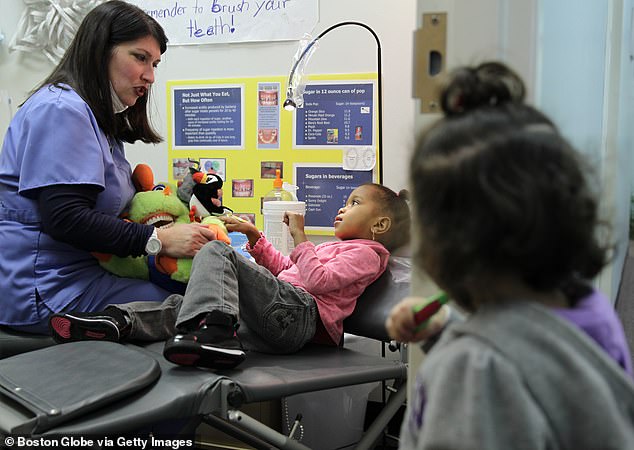 Trump’s crackdown does not include benefits for children and pregnant women The Special Supplemental Nutrition Program for Women, Infants, and Children (WIC), like the center above, in Boston, specializes in

‘This rule prioritizes money over family and tells immigrants that if they want to achieve the American dream, they’d better do it before they get here. Just like the administration’s policy of separating families and putting children in cages at the border, the public charge proposal is unquestionably cruel and goes against our fundamental values as a nation,’ Wolgin argued.

Democratic congresswoman Rosa de Lauro, of Connecticut, said in a statement that the rule change is a ‘demonization of immigrants’ and an attempt to dismantle the social safety net for individuals in need.

‘He continues to make immigrants the scapegoat for a lack of good-paying jobs, even though it is his own policies that have failed to jumpstart wage growth for working people. And we have seen the damage this hatred has caused in recent days,’ she said in the statement, hinting at El Paso.

California Attorney General Xavier Becerra called it an ‘attack on families and lower-income communities of color’ and pledged to legal action to defend residents of the state.

Ken Oliver, senior director of Engagement & Right on Immigration at the Texas Public Policy Foundation, said the administration is making a ‘totally legitimate’ change to the rules that will help reduce the burden on American taxpayers, though.

Oliver said he believes that the new restrictions will be a winning issue for the Republican president who pledged to reform American’s immigration system as he seeks reelection next year.

‘What’s not a winning issue is when the left is having the spectacle of Americans seeing leftist politicians favor including non-citizens in the program after program that they have to pay for,’ he argued.